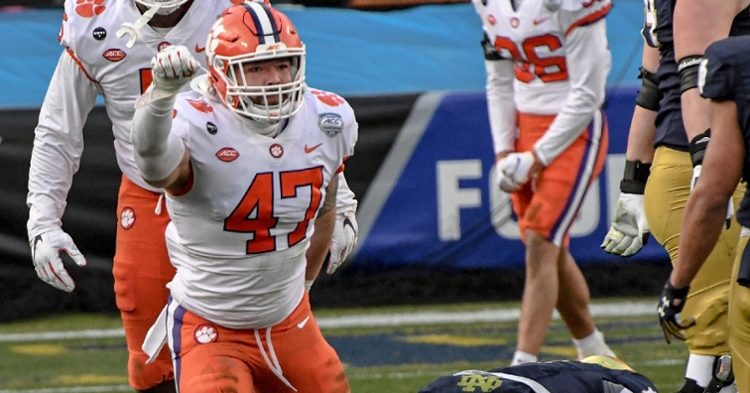 Skalski was missed when out this season and played well in the ACC Championship. (ACC photo)

Clemson's Playoff path continues Friday in New Orleans (8:45 p.m. ET/ESPN) with hopes of finishing it with raising a trophy in Miami Gardens on Jan. 11.

CBS Sports ranks five Tigers among the impact players of the 2020-21 College Football Playoff -- led by Trevor Lawrence at No. 2.

"For anyone who needed it, Lawrence's 412 yards of total offense and three touchdowns in the ACC Championship Game blowout over Notre Dame was a reminder that he's still college football's best quarterback. His 329 yards per game ranks seventh nationally in that category," CBS Sports' Ben Kercheval writes. "I don't know that it's enough to win the Heisman, but he's put together another monster season -- and without great offensive line play. If Clemson is going to win a national title, it's going to be on Lawrence's shoulders."

Reflecting the Heisman vote (final order to be determined on Jan. 5), three of the top-5 is from Alabama in wide receiver Devonta Smith at No. 1, running back Najee Harris at No. 3 and quarterback Mac Jones at No. 5.

Ohio State is led by quarterback Justin Fields at No. 4, followed by wide receiver Chris Olave coming off of missing the Big Ten title game (6), with the defensive side represented by tackle Haskell Garrett (12), cornerback Shaun Wade (16) and tackle Tommy Togiai (18).