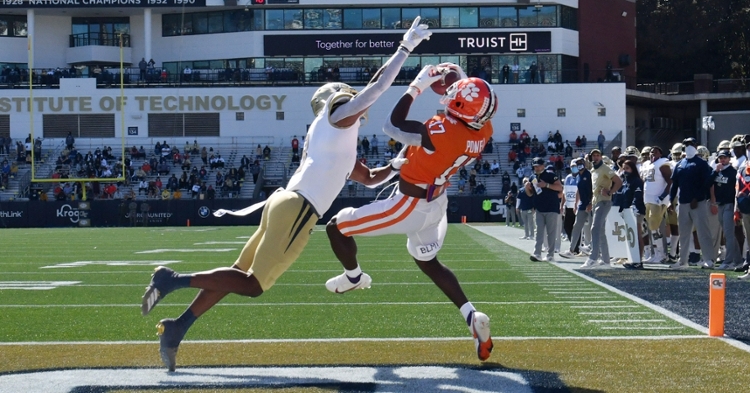 Top-ranked Clemson is moving on and preparing for a struggling Syracuse team this weekend in Death Valley.

Clemson faces Syracuse at noon Saturday (ACCN) in Death Valley. The Tigers are a massive favorite – as much as 45 points in some places – after defeating Georgia Tech 73-7 Saturday. Syracuse lost 38-21 at home to Liberty last weekend.

A few players and coaches were made available for interviews early Monday, and the following is a snippet of those conversations:

*Plan to win. They want to have explosive plays and plan for that each week and have a chart. The defense has to pick what they want to stop. Last week they were gapping them out and trying to stop the running game and it created mismatches in the passing game. There are a lot of contributing factors to the hot start, and Clemson has 96 plays of 10-plus yards from the line of scrimmage.

*Elliott thinks Syracuse will be excited to play in Clemson and they will be prepared to give Clemson the best game possible.

*Amari Rodgers is playing at a high level, and Elliott gives credit to Rodgers’ parents and his high school coaches because he came in mature and ready to play. He is definitely a team leader.

*Travis Etienne doesn’t like the limelight and if it was up to him he wouldn’t speak at all. But Etienne is turning into a leader and the other players are watching him and it elevates their play. A guy like Chez Mellusi is making his game better because he can ask Etienne questions and watch how he plays.

*Walker Parks has not disappointed. He had a different summer and is doing a good job, brings a workmanlike mentality. Blake Vinson is gaining confidence in his knee. Paul Tchio grew up in this last game and got more reps and is getting close to earning more snaps.

*For Trevor, it is being consistent with his decision-making because he is playing at a high level. He isn’t doing too much in the pocket and is seeing the entire field. The throw to Rodgers in the corner of the end zone was the best throw of the day, because he say he had to man-to-man and looked off the safety and went to Rodgers.

*He had faith during the recruiting process that Clemson would offer. His mother also never lost faith.

*Coach Venables coaches you to perfection. It took him a while to adjust to how intense Venables is.

*Mike Jones is like a big brother to him, and they repped the play where Jones tackled the GT running back behind the line of scrimmage a lot in practice last week. He said he is learning every day from Jones.

*Clemson has added a lot of tools to his tool belt so he can be more aggressive rushing the passer. He is learning every day. Right now he is 225-30 and he feels like he could get to 245 or so and still feel like he can make plays.

*Shaquille O’Neal is his favorite sports broadcaster. If he gets a chance to be on ESPN one day he will bring that same energy and confidence.

*He said it was a dream come true to get out and play Saturday. He is blessed to be able to go out there. He said he is learning a lot from his teammates. He isn’t sure how much extra work he will get with Taisun Phommachanh being hurt.

*He said that running down the hill is more nerve-wracking than getting in the game.

*He is trying to learn everything he can from quarterback Trevor Lawrence and asks as many questions as he can. He says Lawrence is so intelligent and he watches him in practice and tries to learn from him.

*Playing scout team quarterback for Brent Venables is good for him. He says Venables makes sure every detail is covered.

*He doesn’t think the quarterback saw him on his interception at Georgia Tech. Always fun to make a play like that.

*They are able to stay elite because everyone waits their turn, points to Baylon Spector, says he has been grinding and learning and developing. He said the program is run off consistency and hard work.

*The dance the defense does after turnovers started this summer whenever they would make a play over the offense. The defenders would point over the offensive players’ heads. They can’t do that in a game, so the dance developed.

*He says that Trenton Simpson reminds him of Isaiah Simmons, has the same body type. Looks like a dominant, physical specimen. In a year or two will be talked about by everyone in the country. He moves really well and is a super physical player and blitzer.