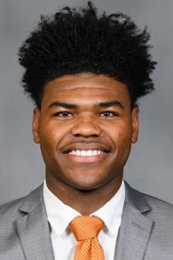 Linebacker
B I O
2020: Made collegiate debut at Wake Forest, adding one tackle … recorded two tackles including his first career sack vs. The Citadel … contributed six tackles at Georgia Tech … added two tackles vs. Syracuse … made three tackles with a sack and forced fumble vs. Boston College … registered seven tackles (0.5 for loss) at No. 4 Notre Dame … notched his third sack of the season among his two tackles vs. Pitt.