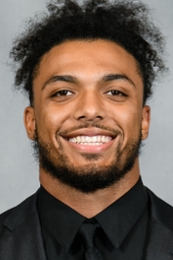 
2020: Made season debut vs. The Citadel, gaining 25 yards on four carries and adding one reception … rushed three times for 10 yards and scored his first rushing touchdown of the season vs. Virginia … gained 13 yards on two carries vs. No. 7 Miami … rushed five times for 21 yards with a touchdown at Georgia Tech … gained four yards on three carries vs. Syracuse … rushed once for five yards at No. 4 Notre Dame.


2019: Enters 2020 with 276 rushing yards and three touchdowns on 44 carries in 81 snaps over 11 games … rushed six times for 36 yards in collegiate debut vs. Georgia Tech … recorded a 57-yard touchdown run on his lone carry at Syracuse … rushed six times for 30 yards vs. Charlotte … gained 22 yards on five carries vs. Florida State … recorded 35 yards and a touchdown on five carries at Louisville … gained 57 yards on eight carries vs. Wofford … rushed twice for five yards both at NC State and vs. Wake Forest … rushed twice for five yards at South Carolina … recorded seven yards and a touchdown on three carries vs. No. 22 Virginia in the ACC Championship Game … ACC Honor Roll selection.


Before Clemson: One of the top running backs in the nation and one of the top all-around players from Florida … ranked No. 137 overall player in the nation by ESPN.com, which ranked him as seventh-best running back and 23rd overall player in Florida … 247Sports listed him as the 17th-best running back in the nation, while Rivals has him as the 20th-best running back … No. 216 player overall and 14th-best running back by PrepStar … unanimous four-star rating … finished his high school career with 3,905 yards rushing and 50 touchdowns … had 4,409 all-purpose yards and 55 total touchdowns … eight-time Player of the Game according to Max Preps over his last two years … averaged incredible 9.3 yards per carry over 32 games and 421 carries … had 21 100-yard games … as a senior had career-best 1,819 rushing yards and 21 touchdowns … averaged 165 yards a game and 9.9 yards per rush … had three straight 200-yard rushing games early in the season … had eight games with at least 167 yards as a senior … as a junior had 1,505 rushing yards and 19 touchdowns … team reached semifinals of state playoffs … averaged 125 yards rushing per game with a high game of 219 vs. Palmetto Ridge … will play in All-American Bowl … Mellusi played his high school football at Naples High School for Bill Kramer … Clemson recruiters were Brandon Streeter and Tony Elliott … committed to Clemson on April 16, 2018.