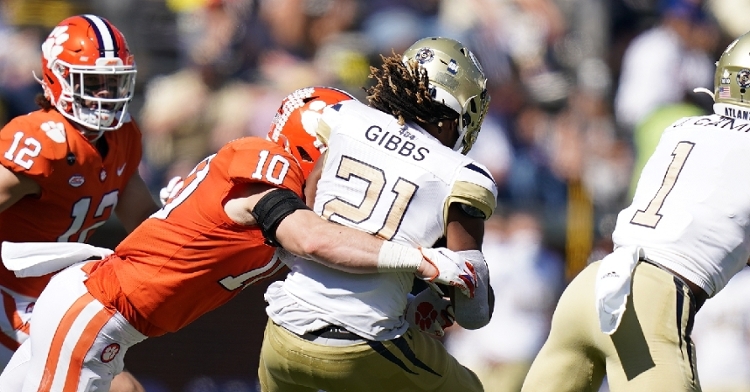 Notes on a dominating road win for the No. 1-ranked Tigers...

-Clemson’s 66-point victory margin is the largest in a game between two ACC teams since the conference’s inception in 1953. It is tied for the ninth-largest victory margin by an ACC team against any opponent in conference history.

-The 66-point victory margin ties for Clemson’s seventh-largest in school history and its largest since a 66-point win against South Carolina State in 2014. It’s Clemson’s second-largest win all-time against a school presently in the Football Bowl Subdivision, trailing only a 73-0 victory against Georgia Tech in 1903.

-Clemson’s 73 points tied that 1903 contest for its most against Georgia Tech in a game in series history.

-Clemson’s 73 points represent Clemson’s third-most against an ACC opponent all-time, trailing its 82-point performance against Wake Forest in 1981 and its 77 points against Louisville in 2018. However, both of those performances came at home, so Saturday’s output was the most scored by Clemson in an ACC road game all-time, passing its 63 at Wake Forest in 2018.

-Clemson’s 73 points tied for Clemson’s second-most points in a road game in school history, trailing its 94 against Furman in 1915 and matching its 73 at Georgia Tech in 1903.

-Clemson opened the game with a modern-era school-record 52 points in the first half. Clemson’s previous high against an ACC opponent in a first half was 49 in its opening two frames against Wake Forest in its national championship campaign in 1981.

-Clemson has now scored at least 37 points in each of its first five games, opening a season with five consecutive games of 37 points or more for the first time in school history.

-Clemson has now won each of its first five games of a season by at least 18 points for the third time in school history, joining the 1929 and 2000 seasons. It is the third time since 2000 that an ACC team has opened a season with five straight wins of 18 points or more, joining the 2000 Tigers and the 2004 Virginia Cavaliers.

-Clemson threw seven passing touchdowns, breaking the school record of six set previously against Central Michigan in 2007, against Duke in 2012, against North Carolina in 2014 and against South Carolina in 2016.

-Lawrence improved to 30-1 as a starter, joining Rodney Williams, Tajh Boyd and Deshaun Watson as the only quarterbacks in school history to win at least 30 games as a starting quarterback. Williams, Boyd and Watson are all tied for the school record with 32 wins each.

-Lawrence produced the first game with at least five passing touchdowns by a Clemson quarterback since Deshaun Watson’s six-touchdown performance against South Carolina in 2016.

-Lawrence (95) also passed Russell Wilson and Eric Dungey (93 each) for sixth on the ACC's all-time career leaderboard for touchdown responsibility.

-Including his 410 combined rushing and passing yards in the game, Lawrence (9,283) became the fourth player in Clemson history to record 9,000 career yards of total offense, joining Tajh Boyd, Deshaun Watson and Charlie Whitehurst.

-Lawrence threw an interception on his 12th pass attempt of the game, ending a streak of 366 consecutive passes without an interception, the second-longest streak in ACC history. The streak concluded 13 pass attempts shy of matching the ACC record held by NC State's Russell Wilson (379 from 2008-09). With 2020 being a leap year, Lawrence went 364 calendar days between interceptions dating to his last pick at Louisville on Oct. 19, 2019.

-Lawrence finished the first half having completed 22-of-27 passes for 391 yards with five touchdowns. It was a Clemson first-half record and the first 300-yard first half by a passer since Deshaun Watson threw for 331 yards in the first two quarters vs. Pitt in 2016. His 391-yard first half alone would have ranked as the 13th-highest total in a full game in school history.

-Lawrence’s five passing touchdowns in the first half tied a school record, matching Tajh Boyd, who accomplished the feat against Wake Forest and in 2012 and against The Citadel in 2013.

Lawrence became the first ACC quarterback to throw for more than 375 yards in a first half since North Carolina’s Marquise Williams (404 against Duke in 2015).

-Lawrence finished the game with a 219.5 passer rating and became only the fifth ACC quarterback since 2000 to open a season with five consecutive games with a 150 or better pass efficiency rating, joining Georgia Tech's Tevin Washington (2011), Florida State's E.J. Manuel (2012) and Jameis Winston (2013), and NC State's Jacoby Brissett (2014).

-Lawrence’s 404 yards were the most by a Clemson quarterback against Georgia Tech all-time, passing Tajh Boyd’s 397-yard game against the Yellow Jackets in 2012.

-Running back Travis Etienne rushed 11 times for 44 yards with a rushing touchdown and caught two passes for 29 yards.

-Etienne has now scored a touchdown in 40 of his 48 career games.

-Etienne lost a fumble on his second carry of the game. It was his first lost fumble since Sept. 28, 2019 at North Carolina. He totaled 206 rushing attempts (and 230 total touches) between those two lost fumbles.

-Wide receiver Cornell Powell recorded his fourth career touchdown reception on a five-yard pass from Lawrence in the first quarter. It was his first touchdown of the season and his first since Oct. 19, 2019 at Louisville.

- Rodgers added his 13th career touchdown in the second quarter, his second multi-touchdown game of the season and the fourth of his career.

-Playing roughly an hour from his hometown of Calhoun, Ga., tight end Davis Allen scored his second career touchdown and his second in as many weeks on a 34-yard touchdown pass from Lawrence in the second quarter.

-Allen became the first Clemson tight end with a touchdown catch in consecutive games since Jordan Leggett against South Carolina and Virginia Tech in 2016.

-Running back Chez Mellusi scored his second touchdown of the season in the third quarter.

-Running back Kobe Pace, a native of Cedartown, Ga., scored his first career touchdown on a seven-yard pass in the fourth quarter. It came on the first passing career touchdown for quarterback Hunter Helms.

-Between Lawrence (five) and Helms (two), Clemson had multiple quarterbacks throw multiple touchdown passes in a single game for the first time since the 2018 Louisville game (Lawrence and Chase Brice).

-Defensive tackle Tyler Davis recorded his first sack of the season in the second quarter. Linebacker Jake Venables also added a sack in the second half.

-Defensive end K.J. Henry recorded his first fumble recovery of the season in the first quarter. It was his second career fumble recovery, joining one he produced in his collegiate debut vs. Furman in 2018.

-Safety Nolan Turner recorded his second interception of the season in the second quarter. It was his fifth career interception.

-On his first PAT of the game, PK B.T. Potter passed Bob Paulling (107 from 1979-83) for fourth on Clemson's leaderboard for career PATs.

-Clemson finished with five sacks, including one team sack when the ball slipped out of the quarterback’s hand, and has now recorded multiple sacks in 27 of its last 28 games, including each of its last 11. Georgia Tech entered the game having allowed only two sacks in four previous games this season.

-Clemson recorded at least three sacks in a seventh straight game, dating to last season, for the first time since a seven-game streak across games 8-14 of the 2018 season.

-Clemson's streak of games with only one or fewer giveaways ended at 12 games when Clemson turned the ball over for the second time in the first half. Clemson’s 12-game streak with one giveaway or fewer was the program's longest in the last 20 years.

-Clemson held Georgia Tech to 2-of-14 on third downs. The 14.3 percent average allowed on third downs was Clemson’s best performance in the category since last year’s Boston College game (13.3 percent).

-Clemson outgained Georgia Tech, 671-204, and after outgaining Miami by 340 yards last week, has now outgained consecutive ACC opponents by 300-plus yards for the first time since the Louisville and Boston College games in 2018.

-Clemson played its 19th game all-time while ranked No. 1 in the AP Poll, the 15th-most since the poll's inception in 1936. It was Dabo Swinney's 18th game coached at No. 1, tying him with Steve Spurrier for 18th all-time.

Clemson earned its 33rd all-time victory against Georgia Tech. Georgia Tech is one of 11 schools against whom Clemson has earned at least 30 all-time victories (South Carolina, Wake Forest, North Carolina State, Furman, Virginia, North Carolina, Duke, Maryland, Presbyterian and The Citadel). It marks the second time this season Clemson has earned its 33rd all-time win against an opponent after having moved to 33-5-1 all-time against The Citadel earlier this year.

Clemson won its sixth consecutive game against Georgia Tech, dating back to a 43-24 home win in 2015. It extended Clemson’s longest winning streak in the all-time series, as the current streak already surpassed four-game winning streaks across the 1898-1903 seasons and the 1993-96 campaigns.

Head Coach Dabo Swinney secured his 135th career win as a head coach to pass Virginia's George Welsh (134) for the second-most career wins by an ACC head coach. At the time of his retirement following the 2000 season, Welsh was the winningest head coach in ACC history prior to being passed by Bobby Bowden.

Swinney improved to 9-5 all-time against Georgia Tech, including postseason play. He became the first Clemson head coach ever to defeat Georgia Tech in Atlanta three times.

Though 2020 is technically a divisionless season, Clemson improved to 31-8 against opponents historically from the ACC Coastal Division, including postseason play, under Head Coach Dabo Swinney. Clemson has now won 17 of its last 18 games against the Coastal Division since 2015.

Clemson pushed its streak of consecutive victories in games that would typically count as ACC interdivisional matchups to 13 games, dating back to the 2016 ACC Championship Game.

Clemson won its 26th consecutive game against an ACC opponent, including postseason play. The 26-game winning streak against conference opponents pulls Clemson within two games of the 2012-15 Florida State Seminoles for the second-longest streak in ACC history.

Clemson improved to 24-1 in October games in the College Football Playoff era (since 2014).

Clemson improved to 17-2 all-time when ranked No. 1 by the Associated Press. Clemson has never lost a regular season game as the nation's top-ranked team.