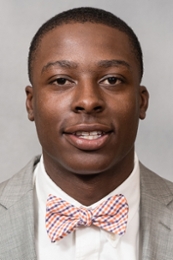 Entered 2020 with 40 career receptions for 329 yards and three touchdowns over 577 career snaps in 42 games … also posted seven kickoff returns for 182 yards prior to the 2020 campaign.


2020: Caught two passes for 15 yards at Wake Forest … gained 25 yards on two catches vs. The Citadel … caught two passes for five yards vs. Virginia … gained 12 yards on two receptions vs. No. 7 Miami … recorded 50 yards and a touchdown on four receptions at Georgia Tech … caught two passes for 45 yards including a touchdown reception on the game’s opening drive vs. Syracuse … recorded a career-high 11 catches for a career-high 105 receiving yards in sharing team offensive player of the game honors vs. Boston College, as his 11 receptions tied for 10th-most in a game in school history … shared team offensive player of the game honors after posting six receptions for a career-high 161 yards at No. 4 Notre Dame, marking his first time recording 100 receiving yards in back-to-back games in his career.