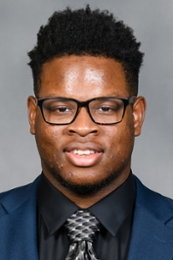 Defensive End
B I O
2020: Shined in collegiate debut at Wake Forest, producing a team-high seven tackles (three for loss) including two sacks … he and fellow true freshman Bryan Bresee became the first Clemson first-year freshmen to record a sack in a season opener since Dexter Lawrence and Tre Lamar in 2016, and Murphy became the first true freshman to post 2.0 sacks in a game since Lawrence in the 2016 ACC Championship Game … tied for the team lead with 2.0 tackles for loss among his three tackles vs. The Citadel, also forcing a fumble that led to James Skalski’s 17-yard scoop and score … posted a six-tackle performance vs. Virginia … added five tackles including a half-sack vs. No. 7 Miami … credited with four tackles (1.5 for loss), a sack and a forced fumble at Georgia Tech, sharing team defensive player of the game honors … added three tackles (0.5 for loss) vs. Syracuse … contributed three tackles vs. Boston College … made five tackles (one for loss) at No. 4 Notre Dame.


Personal: Born Jan. 3, 2002 … majoring in construction science and management … plans to follow a similar path as his brother, an engineering major, and has expressed aspirations of becoming an architect … enrolled at Clemson in January 2020 … his father, Willard Murphy, played at Chattanooga and his older brother, Maxwell, played at NAIA Worcester Polytechnic in Massachusetts.