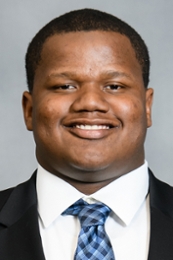 Defensive Tackle
B I O


2019: Second-team All-ACC selection … credited with 51 tackles (9.0 for loss), 5.5 sacks, two pass breakups and a fumble recovery in 539 snaps over 15 games (13 starts) … his 13 starts were the most by a true freshman defensive lineman in school history … became the first true freshman defensive tackle to start a season opener for Clemson since Jeff Mills in 1974 … posted five tackles including a half-sack in the opener vs. Georgia Tech, sharing team defensive player of the week honors … contributed two tackles vs. No. 12 Texas A&M … posted three tackles including the first full sack of his career at Syracuse … added three tackles vs. Charlotte … recorded two tackles including a sack at North Carolina … added two tackles (1.5 for loss) and a half-sack vs. Florida State … posted seven tackles (0.5 for loss) at Louisville … made four tackles (one for loss) vs. Boston College … registered three tackles vs. Wofford … recorded a tackle, a pass breakup and a fumble recovery at NC State, sharing team defensive player of the game honors … credited with four tackles and a pass breakup vs. Wake Forest … contributed a tackle at South Carolina … registered five tackles, including 1.5 sacks, vs. No. 22 Virginia in the ACC Championship Game … added four tackles (one for loss) vs. No. 2 Ohio State in the Fiesta Bowl … recorded a sack among his three tackles vs. No. 1 LSU.