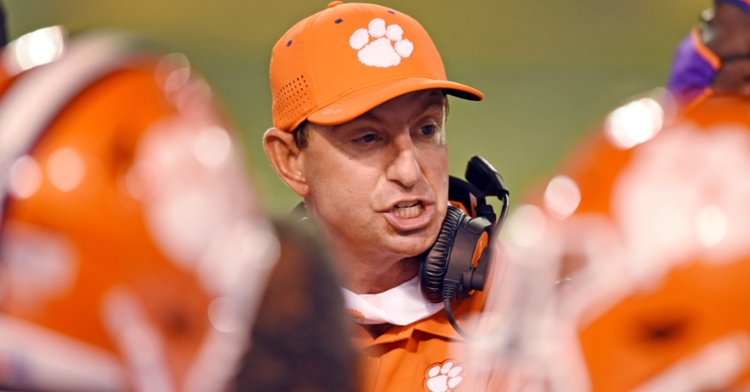 Swinney talks to his players on the sidelines Saturday night at Wake, (Photo per ACC)

Clemson head coach Dabo Swinney said that last year's No. 1 recruiting class is living up to its billing.

Several Clemson freshmen were on display during the Tigers' 37-13 victory Wake Forest Saturday night. Defensive end Myles Murphy had three tackles for loss and two sacks, while Bryan Bresee had half a sack and a blocked field goal.

"He is pretty special," Swinney said of Murphy on his Sunday night media teleconference. "He and Bresee are freshmen on paper only. They are smart and instinctive and coachable guys. But he (Murphy) has all of the attributes that you look for. I was really proud of those guys. Great to see that kind of production right out of the gate because he will only get better from there."

Swinney said he loves all the freshmen.

"This is a really good group. I am going to be surprised four or five years from now if they don't prove to be what they are on paper," Swinney said. "They are the number one class in the country for a reason. Sometimes, you don't know how that is going to translate because they are all in different stages. You obviously see a guy like Myles and Bresee and go wow, but let me tell you when my man (Demonte) Capehart and Tre (Williams) get it all together, they are going to be equally impressive. Everybody is at different levels. Those two freshman receivers, EJ (Williams) and Ajou Ajou? Special.

"I have been doing this a long time. Special talent that will really develop nicely and they will be unbelievable when they leave here. The same thing with those backs and the young tight end, Sage Ennis. Nobody talks about him right now because he doesn't have the opportunity yet, but let me tell you, he is going to be a great player. All of those OL, they have a lot to learn but we are teaching them. That is what we do. They are all the right guys. There isn't one kid in that entire freshman class that I don't think we hit on. We hit on every single one of them and if they stay healthy they will have hit the mark and developed into a really good player."

*Clean first game. Excited to get in the rhythm of the season this week and having a normal practice week. Offensively tempo was outstanding and 19 guys touched the ball.

*Proud of first OL group. The protection was excellent. That group will be really, really good.

*Struggled a little bit with the backups. Need to develop second OL, but all got 15-20 or more plays and that will help make it real to them. Defensively a lot of good things from the first group. Dominated the line of scrimmage. Six sacks and 11 tackles for loss. Controlled the line and did a good job on third down.

*Played eight or nine safeties and all of the corners. Really pleased with that. Pleased with punter Will Spiers and kicker BT Potter.

*Next week will be about improving the team, especially with open date after that.

*Really proud of RG Will Putnam, who had a long way to go from a knowledge standpoint.

*Held RB Lyn-J Dixon, who could have played if needed after battling a minor knee injury. Hope to have RBs Mikey Dukes and Chez Mellusi back this week.

*Walker Parks was impressive, might have been the first freshman OL on the field last night. Had 26 snaps. Will be a great one.

On the social justice-related stickers on Clemson's helmets

"I support my guys. Not everybody is going to think the same and that is never going to be the case. These are young people who have been challenged with a lot of things. They are developing young people and they came up with several different things and came up with what they wanted do. I support them. Nobody will ever agree fully on certain things but I hope people can respect our young men, and what they believe in, and know what their different causes are that they want to bring awareness to." 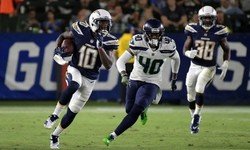