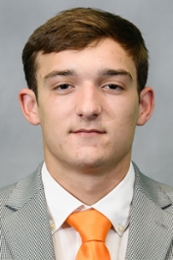 PK
B I O
Entered 2020 with a 14-for-22 career mark on field goals and an 86-for-86 mark on PATs in 30 career games … also contributed 214 career kickoffs with 158 touchbacks and a 63.4-yard career kickoff average in his first two seasons … holds the CFP National Championship Game record for longest field goal, converting on a 52-yarder against LSU.


2020: Earned team special teams player of the game honors for a standout performance at Wake Forest in the season opener, finishing three-for-three on field goals and four-for-four on PATs … his third PAT against Wake Forest was his 89th in 89 career attempts, breaking Clemson’s all-time record for consecutive extra points made (88 by Mark Buchholz from 2007-08) … also tied his career long with a 52-yard field goal in that game … finished 6-for-6 on PATs vs. The Citadel … went 2-for-2 on field goals and 5-for-5 on PATs vs. Virginia, earning team special teams player of the game honors after becoming the fifth player in Clemson history to reach 100 career PATs … had three field goal attempts blocked but was six-for-six on PATs vs. No. 7 Miami … went 8-for-8 on PATs and converted a 30-yard field goal at Georgia Tech … went 5-for-5 on PATs and 2-for-3 on field goals vs. Syracuse … went 2-for-2 on field goals vs. Boston College, including a 50-yarder that was his school-record-tying fifth career field goal of 50 yards or more, matching the mark held jointly by Chris Gardocki (1988-90) and Donald Igwebuike (1981-84) … also went 2-for-3 on PATs vs. Boston College, missing his third PAT attempt of the game (the first PAT miss of his career) to end his school-record streak of 122 consecutive PATs successfully converted … shared team special teams player of the game honors after he recorded a career-high four field goals on four attempts at No. 4 Notre Dame, connecting on field goals of 25, 45, 46 and 30 yards to become the first Clemson kicker to record four field goals in a game since Chandler Catanzaro at Maryland in 2013 … scored 10 points vs. Pitt, including a 7-for-7 performance on PATs and a 1-for-2 mark on field goals.


2018: Immediately earned the kickoff role as a true freshman and became a weapon, finishing third in the nation with 79 touchbacks … averaged 63.8 yards on 114 kickoffs with 79 touchbacks (69.3 percent) while also posting a 1-1 mark on field goals and a 7-7 mark on PATs … earned co-special teams player of the week honors at Florida State, registering six touchbacks on 10 kickoffs, going 5-5 on PATs and recording his first career field goal from 24 yards out … earned the honor again with seven touchbacks on eight kickoffs vs. No. 1 Alabama in the National Championship Game.

Another week and I'm winding work down from home. I'm