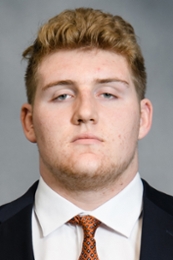 
2020: Made first career start at Wake Forest, playing 65 snaps and helping Clemson to 561 yards of offense … played 33 snaps in Clemson’s shutout win vs. The Citadel … played 68 snaps vs. Virginia in helping Trevor Lawrence post his second 300-yard passing game of the season … played 89 snaps in helping Clemson exceed both 200 yards passing and 200 yards rushing against No. 7 Miami … played 41 snaps at Georgia Tech as Clemson accumulated 671 yards and 73 points in the largest conference win in ACC history … played 78 snaps in Travis Etienne’s three-touchdown performance against Syracuse … played 81 snaps vs. Boston College as Clemson scored 24 unanswered points to overcome an 18-point deficit in the largest comeback win in the history of Death Valley … played 79 snaps in helping D.J. Uiagalelei throw for 439 yards in a double-overtime contest at No. 4 Notre Dame … played 76 snaps vs. Pitt, helping protect Trevor Lawrence during his 403-yard passing performance.


Before Clemson: National top 120 player and four-star recruit by three services … ranked No. 80 overall player in the nation by 247Sports, third-best offensive guard in the nation and 11th-best overall player in Florida … Rivals.com ranked Putnam as its No. 106 overall player, No. 7 offensive guard and No. 14 player in Florida … ESPN.com listed him as No. 116 overall player, No. 5 offensive guard and No. 15 player in Florida … will play in US Army All-American game in San Antonio on Jan. 5 … played for Robert Werner at Plant High School in Tampa the last two years … played at Glenwood High School in Chatham, Ill. as a freshman and sophomore … father is with the U.S. Army and his job was reason for the transfer … helped Plant High to 11-2 season in 2018 … one of four team captains in 2018 for Plant … played both ways throughout his career … in addition to his outstanding blocking, had 63 tackles on defense in 2018 with eight tackles for loss, five of which were sacks … had 31 tackles, including 3.5 tackles for loss in 2016 at Glenwood High … outstanding wrestler who competed in state heavyweight tournament as a freshman at Glenwood in 2016 … was the Florida state champion as a heavyweight in 2018 with a 25-0 record for the season … recruited by Robbie Caldwell and Tony Elliott … signed with Clemson on Dec. 20, 2018 … enrolled at Clemson in January 2019.