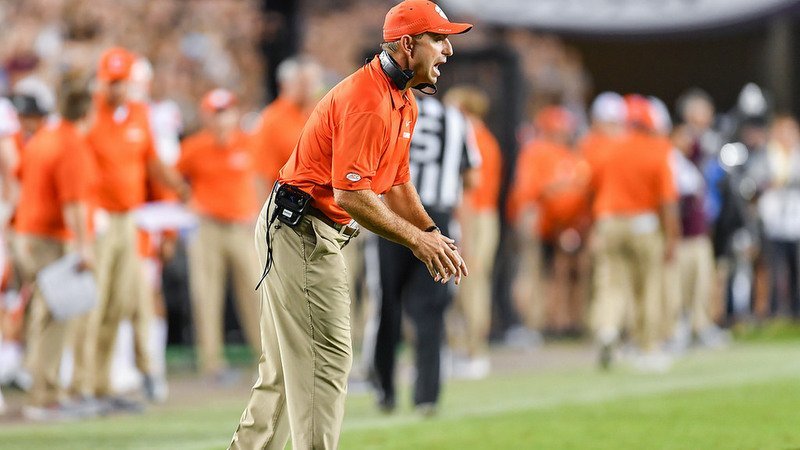 Clemson head coach Dabo Swinney admitted on his Sunday night teleconference that the Tigers aren’t a great team, but he hopes his team makes the necessary improvements to become a great team.

No. 2 Clemson escaped Texas A&M with a 28-26 victory Saturday night in a game that saw the Aggies dominate the fourth quarter. Swinney said there are several areas that need improvement, including the play of the offensive line and coaching.

"I thought Mitch Hyatt, Tremayne Anchrum, and Sean Pollard played well. Outside of that, I didn't think we played to our standard,” Swinney said. “Those three guys graded as winners. We definitely have to improve. And I know we will. Give them some credit at A&M, too. Definitely an area we can get better. As far as play-calling, we always do everything we can to win the game. Part of it was we weren't as efficient as we needed to be to stay on schedule. 59 offensive plays (not good). Room to improve for all of us, including coaches. Really challenging game. There are always things we go back and look at and say dang it, we should have done that differently."

Swinney said there was good news and bad news in the win.

"Long trip back for us but really just proud of our team. Mission accomplished. A long way to go. It was like another opener for us. A great environment,” Swinney said. “They were a great opponent. It was a difficult road opener for us but a big win. The bad news is that we made a lot of mistakes that could have cost us. Now, we made a lot of mistakes and still won on the road. Our experience, leadership, poise, the effort was tremendous and we played very hard. We didn't always play smart. We want effort with technique because that leads to good execution. Our technique wasn't what it needed to be always.

"To me that game seemed like Auburn from a couple of years ago. We had a chance to put them away and dropped three touchdown passes. We had some opportunities to get control of the game and we didn't do that. We didn't finish on defense. We had a two-touchdown lead heading into the fourth quarter. Just way too many busts, big play busts. We're not a great team yet. We will improve, though. We have a lot to correct, teach and evaluate. I'm excited to be 2-0 and with an opportunity to improve.”

"Offensively, no turnovers. No penalties. Good to see some explosive plays and we only had one sack. The biggest things were missed opportunities, busts up front, a fumble, negative plays, three-and-outs and that led to pressure on the defense. We only had 59 plays. We just weren't as efficient as we needed to be. We have to come away with points in the red zone. We were able to overcome it.

"Defensively, we have to play four quarters. We played as good a half as we could play in the first half. They absolutely could not run on us in the first half. We were good on third down early. We had 10 tackles for loss and forced three fumbles. We stopped a two-point conversion. But I am disappointed with 430 yards passing. Just busts. Now there were some crazy plays and you tip your hat, but we had some guys running wide open on base stuff. So that was disappointing. We missed some interceptions. We didn't contain the quarterback well.

"Special teams, the onside kick was big. The blocked field goal was huge. Disappointed with our two 50-yard punts and we didn't cover. But again, I'm happy to be 2-0. We also went into the game healthy. And we came through in good shape."

Did you see any common thread on the busts on defense?

"It was across the board. The biggest thing was poor eyes. They had some unique formations, some empty with two tight ends and they chipped our guys but some of the busts were just basic calls. Our eyes weren't on the right things. Just really frustrating. We've got to increase our focus. We're fortunate we were able to win. Lot of pressure in that game. Just not a lot of video evidence and working knowledge, but again disappointing that some things happened on some basic calls. And it happened during some critical situations. We have a lot to coach on."

What did you learn about your team last night?

"I knew this was going to be a tough game. I thought we had a chance to take the air out of the stadium and we didn't do it. Momentum is a crazy thing. I saw our heart and mental toughness. You go to the play on K'Von Wallace. The game was on the line and he gave great effort to knock that ball loose. A tough call, but he created that call. I love that about our guys. The bad news is we made a million mistakes and could have lost three games with those mistakes. The good news is that we still beat a good team on the road with all those mistakes. I saw all of those things on display last night.

"This team cares. I just love the effort. Mistakes for sure. But man our effort was very good for four quarters. They kept playing and believing. They never lost hope. This team was able to handle the adversity. I don't have any doubt that we will improve and grow."

“They cleared him to go last night during pre-game. We ended up holding him. He banged his knee up last week. I think it was in Wednesday's practice during an inside period. We didn't think he was going to be able to go. We didn't get him in the game. Hopefully he will be able to roll this week. They put his brace back on. He was available if needed."

The performance of Isaiah Simmons

“He's a productive player. He makes the most mental errors right now. It was his first career road game start. He tries to do too much sometimes. He peeks in the backfield a bit too much. Sometimes he gets away with it because he's so fast and athletic. We've got to get him better in a hurry. Isaiah cares. He takes coaching. It's a learning process and it always is when you play young players. He made some good plays and made some costly mistakes, too. He cares and I know he'll get better. His confidence, consistency and discipline will improve."

Cade Stewart getting the start at right guard

"I'm proud of Cade. I really am. We've developed a lot of confidence in him. We have a few positions around here that are gameday decisions. Everything counts. What you do during practice matters. Robbie Caldwell just felt like he had a better week. Pollard played and did some good things. Cade did a nice job. He got his first ever start and it was on the road. He's a physical guy. He can play multiple positions. I love his mindset. I'm really proud of him. I'm glad we've got him for this year and two more."