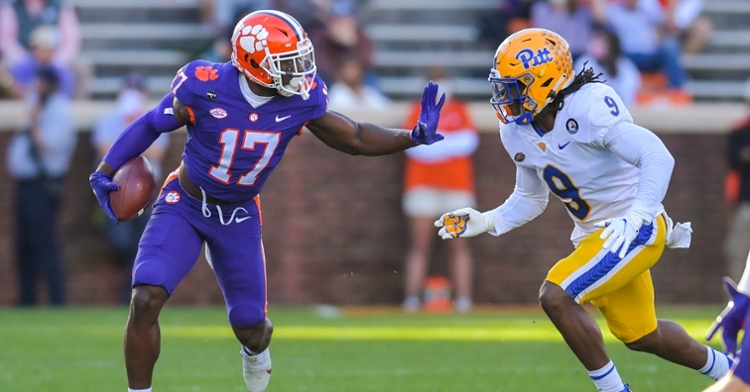 It was great to see the Tigers back on the field after an open date followed by a day-of-the-game cancellation by Florida State. The Tigers came out of the gate looking like a team itching to play.

They looked to be in Championship Phase as they scored 31 points in the first quarter (a Clemson record). There was a little bit of sloppiness or complacency in the middle of the game, but they finished strong to earn an impressive 52-17 win over a quality Pittsburgh team. There’s a lot to breakdown so let’s dive in.

It only took two or three throws for Trevor Lawrence to shake off a month of rust. Once he was locked in, he was exceptional. He had several perfect throws including a 70-yard TD on a flea-flicker. His most impressive pass may have been the deep connection to Cornell Powell that was called back after a lengthy replay review. Lawrence looks every bit the part of a future top pick in the NFL draft. The Heisman race may be another story. Take a look at the three players below and get an idea of which stat line impresses you the most before reading on.

Player A has the most passing yards and passing TDs and still only 3 INTs. Player A is Florida Gators QB Kyle Trask. Player B is not too far behind in passing yards but has 11 fewer passing TDs. Player B has the best completion percentage and yards per passing attempt though. Player B is Alabama QB Mac Jones. Finally, Player C is Trevor Lawrence. His play is certainly Heisman-worthy, but overcoming Kyle Trask’s eye-popping stats and Mac Jones' crazy efficiency may be too much to ask for.

The Tigers had to replace so much production at wide receiver with Tee Higgins and Diondre Overton leaving and Justyn Ross out with an injury. It’s been Amari Rodgers and Cornell Powell who have done the most to fill the void. Amari emerged as WR1 from game one while Powell took a few games to emerge.

Having one more threat emerge, particularly a deep threat who can go up and win jump balls, would further benefit the offense. It seemed like Joseph Ngata was the prime candidate during the offseason, but injuries have derailed his season. Frank Ladson has shown flashes of elite potential, but has also been banged up at times. With both Ngata and Ladson out against Pittsburgh, EJ Williams, wearing No. 39 for his father, a military veteran who passed away at age 39, earned his first start. He caught the first TD of the game – the first of his career. He finished with three catches for 38 yards. We’ll see if he can build on that performance next week against Virginia Tech.

The running game didn’t explode, but it did look much improved. Tiger running backs were able to punch it into the end zone four times, and their 5.3 YPC is more impressive when considering the longest run of the day was just 15 yards. Walker Parks played multiple positions along the offensive line and made an impact. He was in at right tackle on RB Lyn-J Dixon’s first-quarter touchdown run. His block helped open a gaping hole for Dixon to run through.

Playcalling creativity from offensive coordinator Tony Elliott helped the cause, as did the return of Trevor Lawrence. It’s encouraging progress. We’ll hope to see another step forward next weekend against a Virginia Tech team that’s allowing 194 rushing yards per game (4.8 YPC).

Clemson’s defense returned to dominance with the return of three injured starters: DT Tyler Davis, LB James Skalski, and LB Mike Jones Jr. It didn’t take long for the starters’ return to be felt. On Pittsburgh’s second drive of the game, Tyler Davis deflected a pass at the line leading to a Malcolm Greene interception. Davis added a sack in the second quarter.

James Skalski collected six tackles and made his presence felt. Mike Jones Jr. returned and further bolstered the linebacking corps. As we thought, defensive struggles against Notre Dame can be largely attributed to injuries. Pittsburgh has struggled to run the ball all season, but Clemson’s defense looked worlds better with their key players back (funny how that works). Virginia Tech ranks 8th in rushing yards per game and will provide a better barometer.

The Tigers were without safeties Lannden Zanders and Jalyn Phillips, as well as cornerbacks Derion Kendrick and Sheridan Jones. Despite that, the secondary intercepted QB Kenny Pickett four times. CB Malcolm Greene grabbed an interception off a deflected pass. CB Andrew Booth sprinted to the middle of the field and made an acrobatic play to intercept a deep pass. Mario Goodrich showed good reaction time to catch a pass that bounced off a Pittsburgh wide receiver’s hands and caromed his way. He added a second interception for good measure later in the game. Clemson held Kenny Pickett, one of the ACC’s better QBs, to just 22/39 passing for 209 yards, 2 TDs, and 4 INTs.

Florida State did it again. Virginia traveled all the way down to Tallahassee, only to have FSU cancel the contest hours before kickoff, just as they did against Clemson the weekend before. This time they cited COVID-19 infections within their own program. We don’t know how many Seminole players were unavailable last week, but this leads me to wonder if Clemson’s one positive test was the sole reason for the cancellation.

Ohio State also had their game against Illinois canceled due to positive cases within their own program. They have Michigan State and Michigan scheduled for the next two weeks, followed by the Big Ten Championship. If they play all those games and finish 7-0, they’ll be a playoff lock. If they can’t get at least six games in, I don’t know how the committee can put them in the playoff. I know it’s simply the four “best teams,” but resume has to mean something too. Can they really put a 5-win Ohio State team in over a 10-0 Cincinnati or 8-1 Texas A&M? Maybe Florida will upset Alabama and make it easier for the committee to push the Buckeyes out if they can’t play all their remaining games.