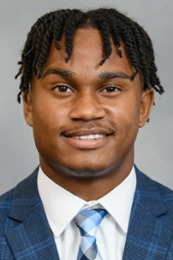 Cornerback
B I O
2020: Made collegiate debut at Wake Forest, recording a pass breakup in the contest … registered a tackle vs. The Citadel … made two tackles at Georgia Tech.


Personal: Born January 16, 2002 … pre-business major … pursuing dream of creating an athletic apparel company … earned an associate’s degree in high school and entered Clemson in the summer of 2020 with two years of college credit.