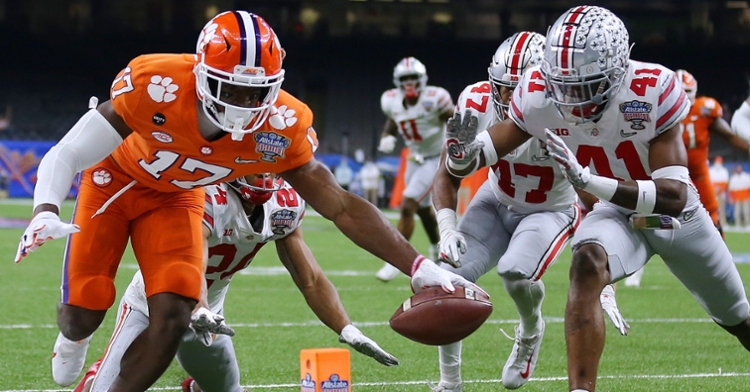 Clemson was humbled in a 49-28 loss to No. 3 Ohio State in the College Football Playoff Semifinal Sugar Bowl on Friday. We take a deeper look into the game with the help of Pro Football Focus:

* PFF identified two key areas where the Tigers struggled in defeat offensively: pass blocking and the running game. Clemson’s O-line finished the season with its two lowest pass-blocking grades of the season, 51.1 against Notre Dame and 59.3 versus the Buckeyes. Clemson allowed two sacks and Trevor Lawrence was made uncomfortable by the Buckeyes en route to multiple turnovers (and near turnovers).

* The Tigers’ running game was stymied to only two yards per carry with Travis Etienne contained to 32 yards on 10 attempts and Lawrence finishing in negative numbers after sacks. Lawrence’s ability as a runner was showcased in the ACC Championship win just a game ago (90 yards rushing) and he was unable to get going Friday.

The Buckeyes' defense forces the fumble on Trevor Lawrence. pic.twitter.com/LDp5bDAd67

* On the plus side, Clemson’s receiving grades were the second-highest of the season (76.1; 76.4 at Georgia Tech the best).

* Overall, the 444-yard effort ranked in the lower half of grades this season offensively (72.6).

Powell had a masterful night with eight catches in 11 targets for 139 yards and two touchdowns. He had the Buckeye DBs on skates:

Trevor Lawrence finds Cornell Powell for a 10 yard TD to cut the Clemson (-7) deficit to 35-21
pic.twitter.com/oq2nbp9WE8

This route by Cornell Powell... OH MY ?? @CornellPowell17 @ClemsonFB

Trevor Lawrence quickly lobs one up to Cornell Powell and Powell makes the sideline catch for 27 yards!

You CANNOT throw a ball better than that#OhioState #Clemson

McFadden tied for the lead in the Clemson O-line grading (73.3) with his best mark in pass protection (73.4).

* Ohio State was really, really good, and Clemson did its part also -- as not really good at all -- for a nightmare night for Brent Venables’ crew. PFF graded the overall effort its lowest by far for a Venables-led Clemson defense (43.5).

* A middling pass rush and struggling secondary hurt plenty on a number of big plays. PFF went deeper into the struggles in an analysis piece Saturday:

"If the deep middle of the field was open, (Justin) Fields took it in stride and delivered bombs time and time again. If it was closed, Fields checked the ball down to his running back who still picked up the first down and kept the drive alive. Touchdown to Checkdown.

“In this case, the middle of the field being open or closed has less to do with the actual structure of the defense and more to do with how that deep middle player was clinging to routes. Ohio State hit deep post routes against so-called ‘middle of the field closed’ defenses because the safety — the post safety — had his eyes focused on other players. So many of Ohio State’s explosive plays came from either the middle player not getting enough depth or choosing the wrong receiver.

“Before we continue with our praise for Fields and the OSU receivers, let’s talk about the protection. Cumulatively, this was the Buckeyes' highest-graded game for pass protection at 81.6. They allowed five pressures on 34 pass-blocking plays. Against Brent Venables' famous blitz package, they only allowed two pressures on 10 blitzes. The offensive line kept Fields upright, which was important after he sustained what looked to be a potential game-ending injury.”

There was plenty of evidence of those factors working together against the Tigers, where the Clemson secondary graded a season-worst 30.6 (previous-worst was 51.6 against Boston College):

OHIO STATE GOIN TO THE NATTY

* Another season-worst effort, by far? The run defense, which graded out at 53.6 (previous-worst was just a game ago against Notre Dame, 64.1). Ohio State averaged 5.8 yards per carry with Trey Sermon carrying most of the load with 31 attempts for 193 yards and a score. He had eight runs of 10-plus yards and two of 30-plus. Those explosive plays passing or running were aided with a failing effort in tackling too (50.5).

Trey Sermon is a monster

* On special teams, Will Spiers tallied one of his better grades this season with two of his five punts landing inside the 20 and a 40.6 net punting average (long of 57). Etienne wasn’t able to provide a spark on kick returns with two for 20.5 yards (also gave up 10 yards by fielding a fair-catch return right next to the sidelines).

Murphy capped an impressive freshman year with a team-best grade and his fourth-best effort of the season (80.1). He led what resistance Clemson had against Ohio State’s running attack (84.6 rush defense grade) and also deflected a pass that led to an interception:

The future is bright on the defensive line as Bresee also stood out with a team-leading pass rush grade (82.2) with a sack and stops on all four tackles (plays designated as failures for opposing team). His rushing grade was more middle-of-the-road on the night, however (58.2 on 19 runs).

Spector got in on three tackles and forced a fumble.

Henry started also and struggled against the run (33.7), and he didn’t contribute much in the pass rush either (54.9) over 37 snaps. Henry did leave the field late in the first half due to injury but returned for the second half.

In PFF’s grading scale, you don’t want the numbers in red and the freshman's grade had such marks in coverage (23.5) and tackling (20.1) over just six recorded snaps.