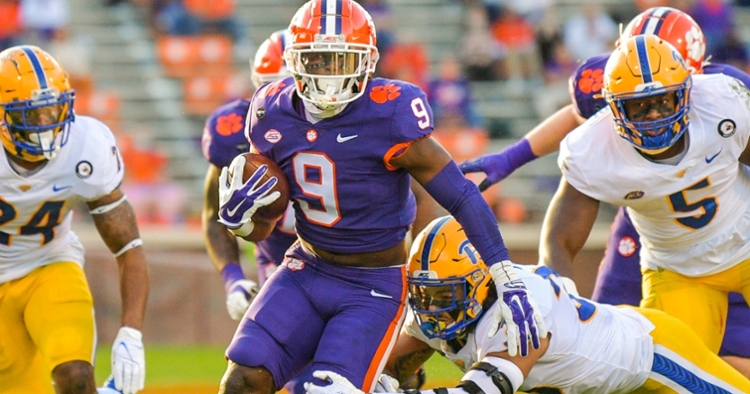 CLEMSON – A mad Clemson team took it out on Pitt.

No. 3 Clemson waited three weeks to play after the loss to Notre Dame, and Pitt paid the price as the Tigers rolled 52-17 on a combined Senior Day and Military Appreciation Day in Death Valley.

Clemson improves to 8-1 overall and 7-1 in the ACC. Pitt falls to 5-5 overall and 4-5 in the ACC. Clemson travels to Blacksburg next week to take on Virginia Tech in what may or not be the regular season finale, depending on what happens with the makeup against Florida State.

Quarterback Trevor Lawrence was outstanding in what is likely his home finale, completing 26-of-37 passes for 403 yards and two touchdowns. It's Lawrence's second career 400-yard game and one yard shy of his career best. Lawrence surpassed 10,000 career total yards at Clemson and moved past Charlie Whitehurst for 3rd most all-time in school history, and won his 32nd game, tied for the most in Clemson history.

Clemson extended its current school record by winning a 28th consecutive game at home and avenged its only home loss since 2014, a 43-42 loss to Pitt in 2016. In the last four years, Clemson's senior class is 27-0 in Death Valley, tying the 2017, 2018 and 2019 Clemson seniors for the most career wins at Memorial Stadium.

Clemson's senior class is the first Clemson class ever to go undefeated in Death Valley since the facility's opening in 1942 and becomes the first FBS senior class to post a perfect career record at home since the 2010 Boise State (26-0) and Oklahoma (25-0) seniors.

"Awesome game. Just excited to play," head coach Dabo Swinney said after the game. "We talked about setting the tone early, and we did that. First quarter we dominated. Defense set the tone. This quarterback had four picks all year, and he had four tonight. Offensively, we were explosive. Had 31 points in the first quarter, the most ever at Clemson in the first quarter. 436 passing and 145 rushing. A lot of those passing yards were run calls.

"Hit some lulls in the section and third quarters, but the guys kept competing. Defensively, good to see us containing. Very good quarterback and runner. Still some work to do there, but we were much better. Just a wonderful day for Clemson football."

The teams traded punts to open the contest, but on Pitt’s second drive defensive tackle Tyler Davis made his presence known. Davis tipped Kenny Pickett’s pass at the line of scrimmage and the tipped ball was intercepted by freshman Malcolm Greene. Greene returned the interception to the Pitt 16, and three plays later Lawrence hit EJ Williams in the corner of the end zone for a five-yard scoring toss. With 11:36 to play in the first quarter, Clemson led 7-0.

The defense forced another three-and-out and the offense went to work. An 18-yard pass to Amari Rodgers started the drive, and a 32-yarder to Williams quickly followed. The Tigers settled for a 46-yard field goal from BT Potter and led 10-0 with just under ten minutes to play in the first quarter.

Pitt tried to run a flea-flicker on the ensuing series, but corner Andrew Booth read the play perfectly and ranged from his far corner position to play centerfield and intercept the pass. Three plays later the Tigers returned the favor, running a flea-flicker of their own. Etienne flipped the ball back to Lawrence, who spotted Cornell Powell running wide open down the middle of the field and it turned into a 43-yard score. With just over seven minutes to play in the first quarter, Clemson led 17-0.

Pitt’s second play after the kickoff saw Bryan Bresee pressure Pickett, whose quick pass to the sideline went through the receivers’ hands and was intercepted by Mario Goodrich. The Tigers took over at the Pitt 35. Five plays later Etienne carried it in from two yards out and with just five minutes to go in the first quarter Clemson held a 24-0 lead.

Pitt was forced into another punt and the Tigers took over at their own 18. Lawrence quickly hit Rodgers for 19 yards, Brannon Spector for 26 yards and Cornell Powell for 17 yards to put the Tigers at the Pitt 17. Lyn-J Dixon took it from there, carrying three times for all 17 yards, the last one a one-yard scoring run. With just five seconds to play in the first quarter, Clemson led 31-0, the most points ever scored in the first quarter in program history.

Clemson was forced into a short punt and the Panthers took advantage to put their first score on the board. Pitt took over at the Clemson 42 and put together a seven-play drive that ended with a 23-yard field goal. With 9:11 to go in the half Clemson led 31-3.

Clemson’s first play from scrimmage on the ensuing drive was a 70-yard bomb that Cornell Powell caught one-handed while being interfered with. A few plays later Chez Mellusi carried it in from a yard out and the Tigers were up 38-3 midway through the second quarter.

Lawrence had the ball punched out of his hands on the second play of the second half, and Pitt recovered inside the Clemson 20. Two plays later they punched it in for the score and the lead was down to 21 at 38-17.

Potter missed a long field goal on the ensuing drive – a comedy of errors from the officials – and Pitt had all the momentum. However, the teams traded punts and miscues over the next several minutes and it took an 89-yard drive for the Tigers to get back on the board. The Tigers mixed the run and the pass during the 10-play drive, and a 35-yard pass to Braden Galloway on a wheel route set up Etienne’s three-yard scoring run. Late in the third, Clemson 45-17.

It was the 76th career rushing touchdown for Etienne, pushing him past Texas’ Ricky Williams for fifth on the all-time FBS list.

Pitt’s Pickett threw his fourth interception of the day – the second caught by Goodrich – and Clemson took over at the Pitt 41 for its next drive. Backup quarterback DJ Uiagalelei hit Mellusi on a fourth-down wheel route from nine yards out and Clemson led 52-17 early in the fourth quarter.

In the final minute, Kane Patterson scooped up a fumble and returned it 57 yards. A couple rushing attempts for Darien Rencher were stuffed at the goal line to run out the clock.