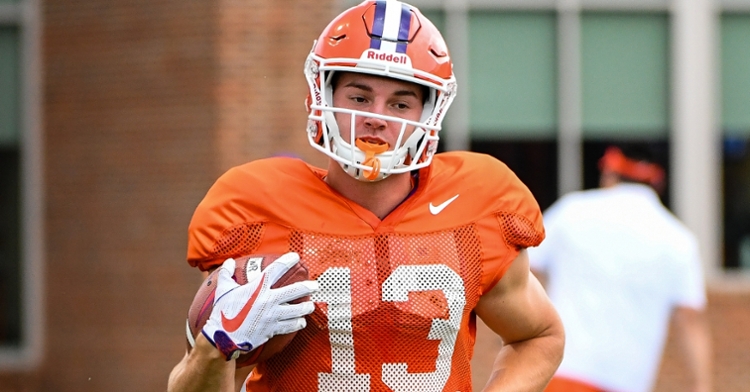 Tyler Grisham told the fans at the Fort Hill Clemson Club Recruiting Wrap Up that as the original No. 13, he thinks of himself as the iPhone 5, with guys like Adam Humphries and Hunter Renfrow improving the model each year. Brannon Spector, the current No. 13, is the iPhone 11 Pro.

That’s high praise for the redshirt freshman, who gained 16 yards on three receptions in 41 snaps over three games. Spector caught a three-yard pass in his collegiate debut vs. Georgia Tech, added a five-yard reception vs. Charlotte, and caught an eight-yard pass at South Carolina.

The 6-1, 195-pounder is a second-generation Clemson player who played wide receiver and safety in high school. His dad Robbie played wide receiver for the Tigers, his sister is on the cheerleading squad, and his brother Baylon is a linebacker on Brent Venables’ defense.

Spector had 49 receptions for 719 yards and seven touchdowns in 2018 as a senior, with 47 tackles, five tackles for loss, and five interceptions on defense.

Here is his Q&A with TigerNet about his redshirt season:

“It’s been good. It’s been a learning process for me. I’ve just learned a lot over the year and in practice each and every day.”

“Just getting out there and getting a feel for it. It was nice to play a little bit.”

“I would say my releases. Coming off the line. At Clemson, we do one-on-ones every day. That’s just helped me a lot -- getting quicker off the line.”

“Guys like Diondre Overton and Cornell Powell and my brother. Just because they know what it’s like and they know the process.”

“Just to trust the process. Not every freshman is supposed to come in here and play a lot. Just believing in coach Swinney and sticking it out.”

Being on the team with his brother

“It’s awesome. I’m just beyond blessed to be able to play with my brother again. I was kinda worried at first when he left high school that I wouldn’t play with him and I’m happy to be back with him. I love him to death.”

“I get -- a bunch of people mess with me and stuff. I like it. I’m definitely excited to show what I’ve got and show my talents next season.”

The best parts of his game

“Just that I play quick. I like to get in and out of my breaks fast.”

“It’s been good. He’s definitely got a lot of energy. I’m loving it. His experience in the NFL and him knowing the game so well. I’m excited to learn from him.”