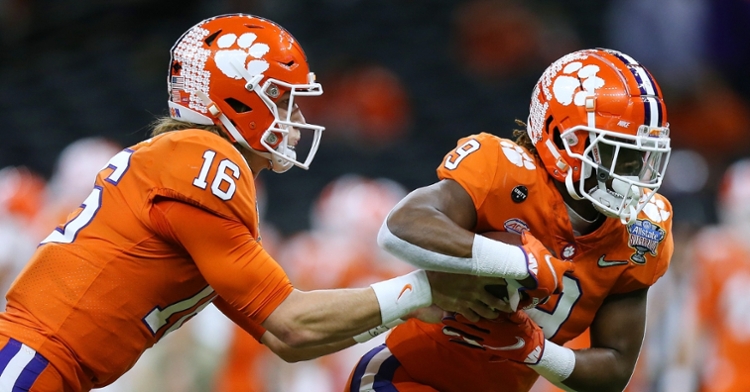 Clemson head coach Dabo Swinney was obviously disappointed during his postgame press conference following the Tigers’ 49-28 loss at the hands of Ohio State in the Sugar Bowl, but he did allow a small smile to cross his face when talking about a group of seniors (and one standout junior) that finished their careers with a remarkable record.

Clemson’s 2020 seniors finished their career with a 51-5 record over the last four years. The 51 wins by the class tie the 2016 and 2019 Alabama seniors for fifth-most in FBS history. The group also never lost a game in Death Valley.

Swinney smiled when recounting what he called a great group of people.

“These seniors went undefeated at home, first time ever in school history. Won 51 games in four years. Just a great group of people,” he said. “We had the most graduates, the most 3.0s we've ever had this semester. We had 74 guys make a 3.0. This is a team full of great young people, great character, great heart. And nothing about the scoreboard changes that.

“We're all disappointed. Really hurt for our fans. Again, this is not what we envisioned. But all you can do is give Ohio State credit because they just flat outplayed a great football game.”

Lawrence concluded his junior season 34-2 (.944) for his career as a starter, the third-best winning percentage by a starting quarterback with at least 30 career starts since Division I split in 1978, trailing only Miami’s Ken Dorsey (.950) and USC’s Matt Leinart (.949), according to ESPN Stats & Info.

Lawrence completed 33-of-48 passes for 400 yards with two touchdown passes. It was the third 400-yard passing performance in a bowl game in Clemson history, joining Deshaun Watson’s efforts against Alabama to conclude the 2015 and 2016 seasons. Lawrence’s 33 completions were a career high, surpassing his previous career-high of 29 set twice.

“I tell you what, man, Trevor Lawrence, I know we didn't win the game, but you saw everything you need to know about that guy tonight,” Swinney said. “I mean, he just wanted to play till the last second and give it everything he has. And that's just who he is as a person.”

Wide receiver Cornell Powell led all players with 139 receiving yards, finishing the contest with two receiving touchdowns among his eight receptions. Powell’s eight receptions were the second-most in a game in his career, trailing only his 11-catch performance against Boston College earlier this season.

The 100-yard receiving game was Powell’s team-high fourth of the season.

“And so Cornell Powell, man, what a year he had. So many positives that we'll process,” Swinney said. “This is going to hurt for a little while. But we will step back and reset and get ready to start back over. This was a special year. A great football team, great group of people. And I'm really, really proud of them. So with that, I'll take your questions.”

Swinney said he got emotional telling Lawrence and running back Travis Etienne goodbye.

"And it's just been an unbelievable journey. I'm just so thankful that I got a chance to coach those guys and be a part of their journey. You know, both of them have such bright futures and a lot of football ahead. I mean, Trevor Lawrence is a generational guy. He's going to be a great player for a long, long time. And so is Travis Etienne. And just to know that the good Lord blessed me to be a part of their journey, I'm just thankful for that.”

Swinney then went on to detail the duo’s accomplishments.

“But both of them are leaving here. Trevor is the winningest quarterback in school history. Played for two national championships. Won one of them. Left here three-time league champion,” Swinney said. “Travis Etienne, he's an all-time ACC leading rusher and got all kinds of records at Clemson. These are two unbelievable players that will be in the College Football Hall of Fame at some point, one of these days down the road. So I'm thankful that the good Lord blessed me to be a part of their journey.

“We're all sad that it ended the way it ended tonight. And we wanted to end it in Miami with a victory and ride off into the sunset, but that wasn't to be. I love those guys, and I'm so thankful for all those seniors. But Travis and Trevor, man, just incredible legacies. And they set the standard, I mean, not just their performance but how they worked, their commitment, their toughness. They didn't ever expect anything more from their teammates than they were willing to give. And just their appreciation of the opportunity. Both of them are graduates and, as I said, have very bright futures ahead. And I look forward to following their journey.”