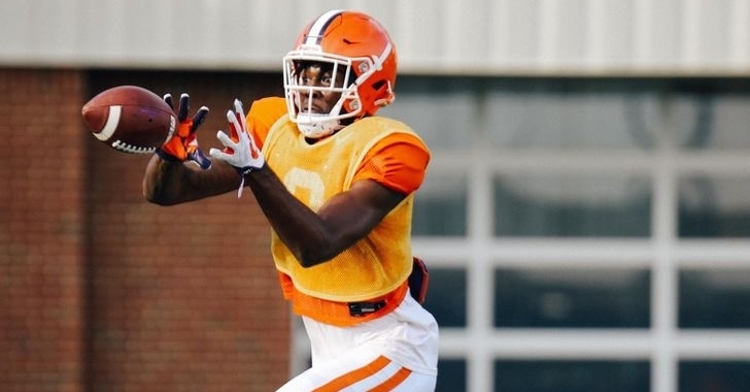 Clemson head coach Dabo Swinney praised his wide receivers after Wednesday’s practice and said that Justyn Ross was back at practice in full pads.

Ross, who will miss this season as he recovers from neck surgery, has been in full pads the past two practices.

“He was full pads yesterday and today and did all of our individual receiver work and routes versus air,” Swinney told TigerNet, “Man, you forget how special he is. It is just amazing. He ran a double move out there today and his ability to plant and cut and change direction with his hips is awesome to see. He is violent with his cuts. I didn’t see any hesitation at all. I am really, really happy with him. I know he was really sore today because hasn’t worn shoulder pads in a long time.”

Other notes from today’s practice:

*Chez Mellusi has taken advantage of his opportunities but Swinney declines to say where he is on the depth chart.

*Offensive lineman Tayquon Johnson graded out “solid” and Swinney says the entire second group is getting better. Swinney says Johnson is a work in progress but he is powerful and if he puts the work in, he can be a special player. He has very good athleticism but is still working himself into the kind of offensive lineman they want him to be.

*Walker Parks played left tackle and right tackle in the same drive Saturday, which is unusual. That was something Swinney wanted to see happen, and he told Parks at breakfast that morning that he wanted to see him play both. They were able to get Jackson Carman out for a few plays and then roll Jordan McFadden out. He says Parks is going to be a great player. Hunter Rayburn showed some physicality, Paul Tchio got in there and did some good stuff. Trent Howard is a power hour guy right now. But Parks has separated himself as a guy they trust playing either tackle spot.

*On quarterbacks Taisun Phommachanh and DJ Uiagalelei, Swinney said Phommachanh practiced both Tuesday and today and pushed through. DJ has had a good week. No word on whether either player is available for this weekend.

*Swinney said this has been a challenging and long journey for Xavier Thomas. He said it was a tough summer for Thomas and he was happy to get him a few snaps against Miami and then 20-something against Georgia Tech. That was a great next step for him in getting his body back to where he wants to be. He is still a gifted player and has “turner the corner.” Tuesday and Wednesday practices are tough and he was great both days. Hopefully he can stay on course and keep progressing and fighting through.

Swinney reiterates that Thomas wasn’t able to have any kind of offseason and spent camp off to the side with the trainers and trying to get into practice shape. Now he’s using games to get into game shape. He is not 100 percent but getting closer. “Any percentage of Xavier is pretty dadgum good.”

*Swinney said this is a fast defense and the guys on the back end can fly. The guys up front are fast. He said he’s had a lot of guys that can run but they don’t play fast, but this group plays fast. They get a lot of hats around the football.

*On the wide receivers, Swinney says anybody in the country would love to have this group. “That’s a bunch of dudes,” Swinney said. Joseph Ngata had his best week of practice. Ajou Ajou is “still baking” and will be in the oven for a while. EJ Williams will be a superstar.

*Punter Aidan Swanson’s confidence is growing. Swinney said he will be a three-tool guy for the Tigers. He will be a kickoff specialist, a punter, and kick field goals. He still has four years considering this a Covid year.