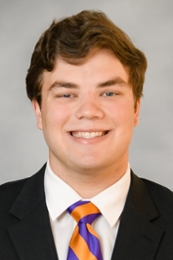 Offensive Line
B I O
Overall: One of the most versatile offensive linemen in the Clemson freshman class who played all five positions on the line in high school … started at multiple offensive line positions in 2019 based on whom was the best defensive lineman his team would face … originally committed to Georgia Tech … was the sixth offensive line commitment in this class … his father, Johnny, was a teammate of Dabo Swinney at Alabama, including during its 1992 National Championship season.


In High School: Played the 2019 season for Matthew Forester at Briarwood Christian High School in Birmingham … played his first three years for Fred Yancey, the veteran coach who retired after 2018 season … helped Briarwood Christian to a 45-10 record over his four years … three-year starter … team posted an 11-4 record in 2019 … helped his squad to a 9-3 mark his junior year, a 13-1 record his sophomore year and a 12-2 mark in his freshman season … reached quarterfinals of the state tournament his freshman year and reached the finals in 2017 … also had experience as long snapper … attended Dabo Swinney Football Camp six years during his youth … was a PrepStar All-Regional selection.


Personal: Committed to Clemson on Dec. 6, 2019, 12 days prior to signing … recruited to Clemson by Robbie Caldwell and Todd Bates … his father, Johnny, played with Dabo Swinney at Alabama and was a member of the 1992 Alabama National Championship team … wore No. 75 in high school.