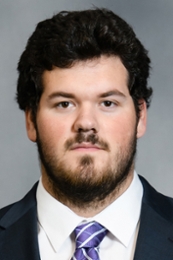 Offensive Line
B I O
Played 40 snaps over four games while redshirting in 2019.


Before Clemson: Four-star prospect by ESPN.com who is ranked as 18th-best offensive guard in the nation … 247Sports ranked him as 27th-best offensive guard … played his first three years of high school football at West Florida Tech … played on varsity as an offensive tackle at the end of 2015 season, then started in 2016 and 2017 … team reached second round of the state playoffs in 2016 and Final Four in 2017 … also played baseball as a pitcher and first baseman at West Florida Tech … transferred to Pensacola High School for his senior year and played baseball in spring of 2018 and football in the fall … named to the all-area team on the gridiron … played in all-area All-Star game on Dec. 14, 2018 … played his senior year of high school football at Pensacola High for Mike Mincy … brother plays college baseball at Coastal Alabama … won Pensacola High FCA Award for 2018 … named to National Honor Society … primary Clemson recruiters were Jeff Scott and Robbie Caldwell … committed to Clemson on June 11, 2018 … enrolled at Clemson in January 2019.