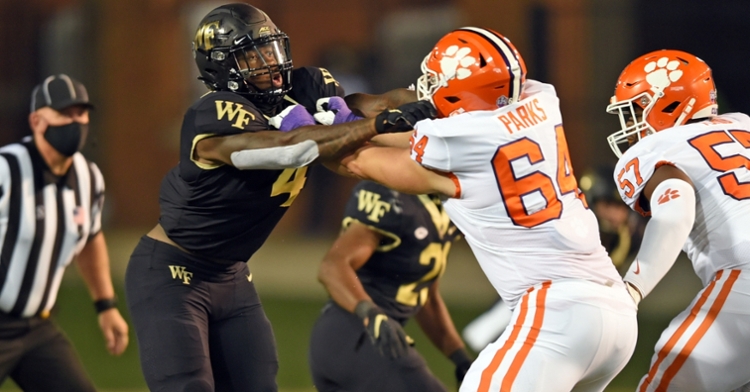 Offensive lineman Walker Parks knows there is a lot he doesn’t know about college football, but he’s willing to learn. To this point, the true freshman out of Kentucky has been a quick study.

Parks has appeared in all four of the Tigers’ games this season, logging 61 snaps. He was the first offensive lineman off the bench in the opener at Wake Forest, and head coach Dabo Swinney had no problem throwing Parks into the fray against Miami last week when starting left tackle Jackson Carman was pulled briefly after a penalty.

Parks played 24 snaps against The Citadel, just three against Virginia, but rebounded for eight snaps in the win over Miami.

Getting to play in all four games has been a bonus.

"I didn't have any expectations," Parks said Tuesday. "Being a freshman I know my place but getting early playing time means a lot to me. I played a bunch of snaps, especially against the Citadel and got a little bit in the Wake Forest game."

Parks didn’t arrive until June, and it didn’t take long to realize he had a long way to go before he was ready to play.

"Going into fall camp I realized how much about football I did not know," Parks said. "Watching tape from high school, run block and pass set technique, I knew a decent amount but nowhere near what I needed to know. I still need to develop because I am lacking in a lot of places. Have developed thanks to Coach Caldwell and the older guys."

"I know I'm a serious guy and I probably don't show as much emotion as I should, but I'm always happy," Elliott said. "But I'm always thinking. And Walker Parks is like that. I'm struggling to get him to smile, which is not a bad thing, trust me. But he's very serious."

An eye-opener for Parks was going against players like Bryan Bresee and Myles Murphy every day in practice.

“Obviously, the talent coming in on the defensive line and the guys that are already here all around on the entire defense is different,” Parks said. “In high school I went against a couple of good opponents and different camps like The Opening and the Five Star Challenge, but that was just every now and then. Back in high school the guys were about half my size so it wasn't much of a problem, but coming here in fall camp I remember doing one-on-one's and getting absolutely dogged by these guys.

“That's when I realized that I needed to work on my stance and weight distribution, work on my punch pretty much everything all around. In high school, the guys weren't this fast or this strong so if I got hands on them it was over, but if you're not technically sound all around you're going to get whooped by these guys."

Parks is just one of a new wave of young offensive linemen who are learning on the job.

"We have a lot of young guys that need developing, so Coach (Robbie) Caldwell) has to stay on us," Parks said. "He's been hard on us, but it's been working. He's having to develop us quicker than usual because normally we have the redshirt year and a year to get ready, but we don't have that this year. How much I didn't know about football he's taught me. He and Jackson (Carman) and Jordan (McFadden) have helped me a bunch, and that's been a huge part of my progression."