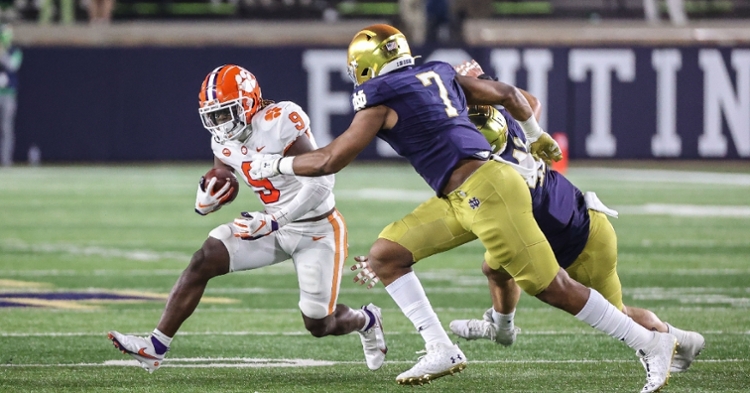 There is a lot to unpack and a lot of takeaways from Saturday night’s thrilling game between Clemson and Notre Dame. There are tons of storylines, the main one centering on Clemson’s large injury report, but there are one or two that needed to be noted first.

Clemson got shoved around on both of lines of scrimmage for four quarters and two overtimes, had a really good defense standing on the sidelines injured by the time the game ended, didn’t get any help from the officials or replay, and had veteran players make mistake after mistake. There was also a true freshman quarterback at the helm, a veteran running back once again gift-wrapping a touchdown to the opposition and then failing to stay inbounds as the Tigers tried to run out the clock, a veteran receiver fumbling away a possession, and Clemson linebackers being stuffed on the blitz time after time after time. At one point, there were seven defensive starters on the sidelines, with the game in the balance. It’s hard to win against a good team on the road under those circumstances.

Notre Dame got the best performance out of quarterback Ian Book in his career.

And there was Clemson, still with a chance to win the game, leading late, and forcing the Irish into two overtimes to close the deal.

The fact that Clemson was still in the game despite all of those mistakes is a testament to Dabo Swinney’s culture, to the playmakers on the roster, and to the heart and fortitude of the players. As Swinney said after the game, it was a locker room that was hurting, and this one will sting for a few days.

The good news is that the Tigers have two weeks to get healthy. We won’t have word on offensive lineman Matt Bockhorst or defensive tackle Bryan Bresee until we speak with Swinney on Monday (the open date has a different media calendar), but it sounds like the Tigers came out of the game without any serious injuries. Everyone is hopeful that defensive tackle Tyler Davis and linebacker Mike Jones will be back for the Florida State game in two weeks, and the others will be able to heal their bumps and bruises.

There are concerns, and they are valid concerns. The coaches have told us all along that this is one of their best offensive lines in recent memory, and that the lack of success in the running game has more to do with teams stacking the box than a lack of push in the run game. Our eyes have told us otherwise – even Syracuse was hitting running back Travis Etienne in the backfield – and Notre Dame stifled the running game to the tune of 33 yards on 34 carries. The interior of the line, especially after Matt Bockhorst left with an injury, was just not good at all.

I can understand Clemson’s defensive line struggles – there were sometimes three true freshmen going against 22-year old men who had played a lot of football – and that will get better with time and experience. But the offensive line has lots of questions and there don’t seem to be many answers, unless you undertake a youth movement in the middle of the season.

It’s obvious the coaches love true freshman Walker Parks, and he can play guard or tackle, but he has played mostly tackle since he arrived over the summer. They could move Will Putnam or Mason Trotter to center for now, and slide Parks into a spot in the interior. A lot might depend on the status of Bockhorst for the FSU game – if he needs another week there could be some reshuffling, or the coaches could simply stick Trotter back in at left guard and leave the rest as is. But with the championship phase of the season starting, that seems risky. Something has to happen, some kind of shakeup, to get the running game on track. The status quo is working from a standpoint of the offense is scoring points, but now everyone has the gameplan on how to make things difficult. Sure, FSU and Pitt and Virginia Tech don’t pose the same threat as Notre Dame along the lines of scrimmage, but the Irish are out there waiting on a possible rematch, and if you make the Playoffs, a team like Ohio State has the same personnel as Notre Dame, only better.

The next few weeks, from an injury perspective and a schematic perspective, might define Clemson’s season. They are good enough to win it all, and like we’ve said, everything was against them Saturday night and they were still in it, but flaws have emerged that need to be fixed. Sooner rather than later.