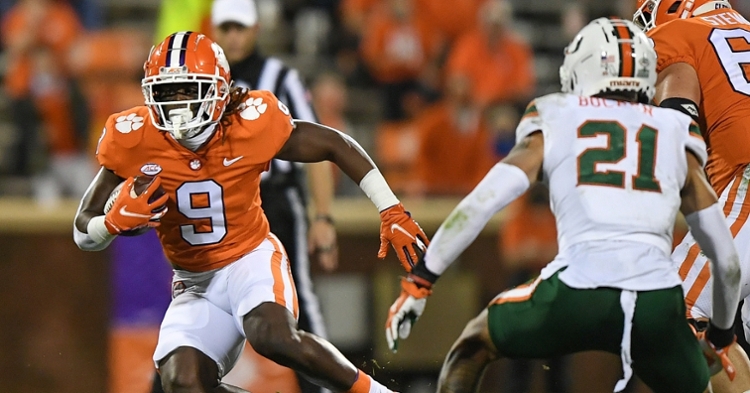 Etienne looks for yardage against the Canes. (Photo courtesy of ACC)

CLEMSON – Travis Etienne gets overshadowed by the towering presence of quarterback Trevor Lawrence at times, but Saturday night showed the entire nation that the Tigers’ dynamic running back should be in the conversation for the Heisman Trophy.

Etienne carried the ball 17 times for a season-high 149 yards and two touchdowns and added a team-high eight receptions for 73 yards in leading No. 1 Clemson to a dominant 42-17 victory over No. 7 Miami Saturday night in Death Valley.

With the Tigers holding a 21-10 in the third quarter, Etienne broke off the run of the night, scampering to the right for a 72-yarder that effectively ended what little momentum Miami had accrued.

ESPN college football analyst Kirk Herbstreit called the win over Miami and remembers the first time he saw Etienne –- the freshman broke off a long touchdown run at Louisville in 2017.

“I called that game at Louisville that night and I can't remember who the other, they had another back that was still on the team that played, and I think was a starter and I remember Dabo leading into the game was like, wait, wait, do you see this freshman we have? You know, he can fly and he's got a bright future,” Herbstreit said earlier this week. “But Dabo – I mean, the way they recruit every year, they've got a few guys that he says that about, and then he got into the game and he took one to the house and our cameras kind of caught him and all you saw was his big smile and braces. And he just looked like a 16 or 17-year-old kid. And you saw that speed, that initial burst and then his speed that the guys couldn't catch up to - that was my first observation of him”

“And then, of course, I've followed him very closely throughout his career. I remember seeing him the next year that he came back and seeing a lot more strength in his lower body, and his ability to bounce out arm tackles,” Herbstreit said. “I think in his third year I started to see more patience, instead of just going immediately and trusting his speed. He started through that, that the game reps and experience that he had he had for himself. He started to kind of wait for plays to develop and wait and wait and then, like great backs do, then hit it. And so I think it's just been a very, very natural growth for him at that at that position.”

As a senior, Etienne seems to set a record every week and is turning into the kind of complete back that deserves to be in the Heisman conversation and deserves to get a little more attention from the rest of the nation.

“This year you're going to just see it all put into one – the patience, the speed that's as good as anybody in the country. The power that he now has the balance… you saw that last week against Virginia, when he had that spin move and he got hit,” Herbstreit said. “And somehow maintained his balance, got his hand down and scored catching the ball out of the backfield. I just think he's become a complete back and I think it was really a bit of an eye opener when he said he was coming back, you know, after last year, I think a lot of people assumed he would leave and I think he's an example of guys that decided to come back and complete their maturation before they go to the next level. Now an NFL team is going to get a guy that isn't every down back. I do not think the nation gives him the love or the appreciation that he deserves. I think it's because Trevor gets so much attention for that offense over the last couple years.”

Miami head coach Manny Diaz said after the game that Etienne is "the guy" on the Clemson offense.

"I can talk superlatives on Trevor Lawrence all day, but Travis Etienne is the guy. He’s as good of a college football player as there is in college football," Diaz said. "Obviously the whole plan on third down is to not let him throw the ball to Etienne and that’s easier said than done because when he gets in the open field he’s so dangerous. Again, we have got to do better than what we did because Trevor Lawrence would throw the ball five yards on a swing to Etienne and let him go. Those balls also count as passing yards. We were unable to takeaway what they do best and what their strength was on third down. We made adjustments and we got better at it as the game went on, but in those first couple of drives, it was really tough.”