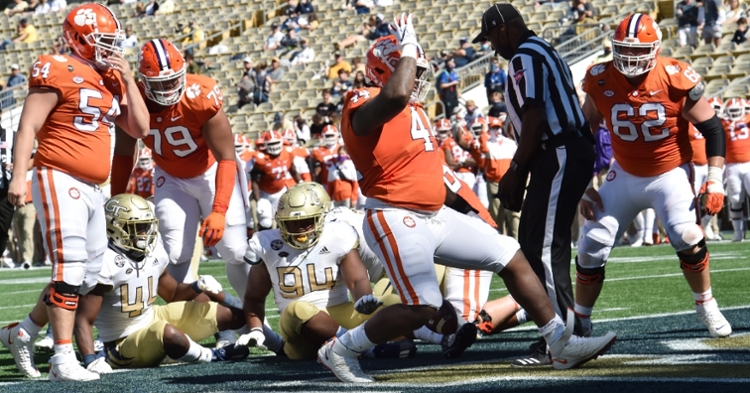 Top-ranked Clemson put up 52 points in a record-breaking first half and routed Georgia Tech 73-7 in at Bobby Dodd Stadium in Atlanta early Saturday afternoon.

Quarterback Trevor Lawrence threw for a career-high 404 yards on 24-of-32 passing, with five touchdowns. Travis Etienne had 44 yards on 11 carries. Amari Rodgers had a career-high 161 yards on six receptions. Ten players ran the football and 15 players recorded a reception.

Things got so bad for the Yellow Jackets that fifth-string quarterback and punter Will Spiers threw a pass after entering the under center in the fourth quarter.

"Tremendous performance. Really proud of our guys. We came down here and really wanted to make some history," Swinney said. "We wanted to do something that’s never been done. It’s not often you get a chance to do something that has never been done especially at a place that has had a lot of success in 100 and something years of football. It just goes to show you how this rivalry has been. I have been in that locker room many times with some hurt feelings so to win down here three in a row that’s a great accomplishment and something we are really proud of.

"Just love the mindset of our team. I love the mindset, the focus, the maturity coming off a win like we had like last week and to get back to work with back to back really late nights the past two weekends and to have an early game this week on the road. I just like the leadership and the readiness of our team this week. We got better today. Great teams show up ready and great teams get better. I thought we grew up last week and I thought we got better this week and that was the objective."

The points are the most points in a road game in the Dabo Swinney era. It's also the most points on the road since 1915 when Clemson scored 94 at Furman. It is also the modern-era scoring record scored by a Tech opponent. Auburn scored 94 in 1894. Clemson scored 73 in 1903, which was the impetus for Tech backers to put together money to hire John Heisman away from Clemson. Per ESPN, it's the largest margin of victory in an ACC game in league history.

With the win, Trevor Lawrence improves to 30-1 as a starter, the fourth Clemson quarterback to achieve that feat. Tajh Boyd, Charlie Whitehurst and Rodney Williams are all tied for the lead with 32 wins.

Head Coach Dabo Swinney secured his 135th career win as a head coach to pass Virginia's George Welsh (134) for the second-most career wins by an ACC head coach. At the time of his retirement following the 2000 season, Welsh was the winningest head coach in ACC history prior to being passed by Bobby Bowden.

Clemson won a 26th consecutive game against an ACC opponent, including postseason play. The streak against conference opponents puts Clemson within two games of the 2012-15 Florida State Seminoles for the second-longest streak in ACC history.

Clemson won a 37th consecutive non-bowl game, tying the 1992-96 Nebraska Cornhuskers for the third-longest streak in the AP Poll era.

The first half was a clinic in offensive and defensive football. The Tigers turned the ball over on the opening possession – an Etienne fumble – but it was all Clemson from there. The defense forced a punt and Rodgers returned it 13 yards to the Tech 41. Four plays later, Lawrence hit Cornell Powell on a five-yard pass and Clemson led 7-0.

It didn’t take the Jackets long to respond, with quarterbacks Jeff Sims hitting a wide-open Jamal Camp for a 59-yard scoring pass and it was tied at 7-7. The Tigers then ran off the next 45 points over the rest of the half, and it started on the first play of the ensuing drive when Lawrence hit Rodgers over the top for an 83-yard score and a 14-7 lead. BT Potter added a 30-yard field goal on the next drive and it was 17-7 with 4:03 remaining in the first quarter.

The next Clemson drive ended with an interception – Lawrence’s first pick in almost a year – but it didn’t take the Tigers long to recover. The Jackets reached the Clemson 37-yard line and decided to go for it on 4th-and-1, but Mike Jones forced a fumble and Clemson took over at its own 38. The drive ended with Lawrence hitting tight end Davis Allen – who was wide open – on a 34-yard strike for a 24-7 lead early in the second quarter.

A 35-yard pass to Rodgers set up Clemson’s next score. Defensive tackles Nyles Pinckney and Bryan Bresee lined up in the backfield, and it was Pinckney who scored from a yard out for a 31-7 lead midway through the second quarter.

On the ensuing drive, Lawrence rolled left and threw back to the middle of the field, hitting Frank Ladson on an eight-yard scoring toss and a 38-7 with just 3:14 to play in the half. Safety Nolan Turner jumped a Sims pass on the Jackets’ next drive, setting up a three-yard run by Etienne for the 45-7 lead with 2:10 left on the clock.

Georgia Tech once again went for it on fourth down – facing a 4th-and-6 at the Clemson 35 with 53 seconds remaining – but the play gained just three yards and the Tigers took over at their own 32 with 47 seconds left to play. Lyn-J Dixon broke off a 21-yard run on the first play of the drive, and a 31-yard pass to Allen set up a 16-yard touchdown pass to Amari Rodgers in the back corner of the end zone for a 52-7 lead at intermission.

Lawrence was 22-27 for 391 yards and five touchdowns in the half, while Amari Rodgers had a career-high 161 yards on six receptions in the half. Clemson rolled up 478 yards in the half.

Clemson went with a bevy of reserves in the second half, and the Tigers got a 5-yard rushing touchdown from Chez Mellusi midway through the third quarter that made it 59-7. Hunter Helms entered the game in the fourth quarter (Taisun Phommachanh had the majority of the third quarter) and engineered a scoring drive that ended with a six-yard shovel pass from Helms to Kobe Pace for the score and a 66-7 lead.

Helms later threw a short screen that wide receiver Ajou Ajou turned into a 35-yard reception and score for a 73-7 lead midway through the final quarter.