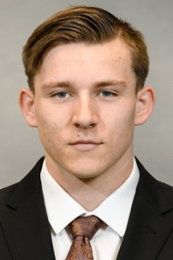 Defensive End
B I O
Walk-on who appeared in three games in his first season with the program in 2019.