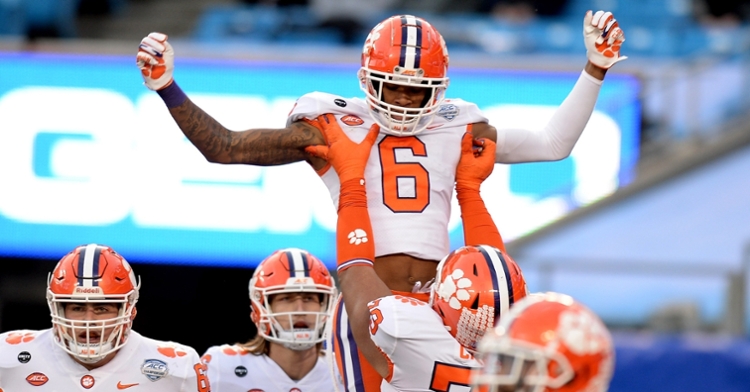 Today, Clemson and Oklahoma became the first teams in any active conference to win six consecutive outright conference titles. The last team presently in the Power Five to win at least six straight outright titles was Oklahoma (12 from 1948-59) as part of the now-dissolved Big 8 Conference.

Clemson became the first school to win 10 games in 10 straight seasons as a member of the ACC, as only the final nine of Florida State's 14-straight 10-win seasons came during the Seminoles' tenure in the ACC.

Clemson improved to 18-8 under Dabo Swinney in rematches of losses. Entering Saturday, Clemson had suffered only 32 losses under Swinney and had 25 previous opportunities to avenge its most recent loss against an opponent, going 17-8 in those contests. (There are six programs Clemson has not faced again since a loss in the teams' most recent meeting.)

Clemson improved to 9-5 all-time in games between two AP Top 5 teams. Clemson is now 7-3 since 2016 when both teams have entered a game in the AP Top 5.

Clemson defeated an AP Top 2 team for the fifth time in school history. Clemson has two wins against No. 1 (vs. Alabama to end 2016 and 2018) and three wins against No. 2 (vs. Ohio State in 2016 and 2019 and against Notre Dame on Saturday). Of note: Ohio State was ranked No. 2 by the AP for the 2016 Fiesta Bowl despite being the No. 3 seed in the College Football Playoff.

Clemson improved to 52-3 against conference opponents since the start of the 2015 season, the first year of Clemson's active run of six consecutive ACC titles.

Clemson won its 14th consecutive December game, dating to Clemson’s 2011 ACC Championship Game victory against Virginia Tech. Clemson entered the game as one of three schools to be undefeated in December since 2011 with a minimum of five games played, a list that also included Alabama (10-0) and Penn State (6-0) as of the start of Saturday’s contests.

Clemson improved to 25-13 all-time in December games, including postseason play.

Clemson has now won 87 of its last 89 games, including each of its last 50, when leading at halftime.

Clemson improved to 108-2 when totaling more first downs than its opponent since 2011.

Clemson improved to 68-1 when rushing for 200+ yards under Dabo Swinney.

According to ESPN, the game represented only the fourth time in the AP Poll era (since 1936) that two teams have faced one another twice in a single season with both teams ranked in the AP Top 5 for both meetings, joining 1959 LSU/Ole Miss, 1996 Florida State/Florida and 2011 LSU/Alabama. With Clemson’s win on Saturday, teams that lost the first meeting are now 4-0 in rematches between Top 5 contests that same season. In every instance, the team that lost the first game won the rematch by at least 21 points.

Clemson recorded 541 total yards, including 322 passing and 219 rushing. It was Clemson’s second game this season exceeding both 200 passing yards and 200 rushing yards, joining Clemson’s victory against Miami (Fla.). Clemson is now 53-0 when both passing and rushing for 200+ yards under Dabo Swinney.

Clemson’s 500-yard performance was its fifth of the season and its first since Nov. 28 vs. Pitt. Clemson is now responsible for three of the four 500-yard games in ACC Championship Game history.

Clemson has now opened a season with 400 yards of offense in each of the first 11 games of a season for the second time in school history (2018).

Clemson has now rushed for 200 yards in consecutive games for the first time since last year's regular season finale and ACC Championship Game against South Carolina and Virginia, respectively.

Clemson joined 2013 Florida State as the only ACC teams ever to score 34 or more points in each of the first 11 games of a season.

Heisman contender Trevor Lawrence was named the game’s Most Valuable Player after he completed 25-of-36 passes for 322 yards with two passing touchdowns. He also rushed for a season-high 90 yards, the second-most of his career and his most since a 107-yard rushing day against Ohio State in the 2019 Fiesta Bowl.

Clemson produced a 300-yard passer (Lawrence) and a 100-yard rusher (Travis Etienne) in a single game for the second time this season, joining the season opener at Wake Forest. The performance represented the 16th time in history that Clemson has produced both a 300-yard passer and a 100-yard rusher in a single game. All 16 instances at Clemson have come since the turn of the century. Thirteen have come under Dabo Swinney, including five by the Lawrence/Etienne duo.

Lawrence now has a 50-yard touchdown pass in consecutive games for the first time since the ACC Championship Game and the Fiesta Bowl in 2019.

Lawrence also scored on a 34-yard touchdown rush in the third quarter. It was his seventh rushing touchdown of the season and his 17th of his career. The 17 career rushing touchdown pass Kelly Bryant for sole possession of fifth-most by a Clemson quarterback in the modern era.

Etienne rushed 10 times for 124 yards with one rushing touchdown and caught three passes for 12 yards.

The 100-yard rushing game was a school-record-extending 20th of Etienne’s career, tying him with NC State’s Joe McIntosh and Boston College’s AJ Dillon for seventh-most in ACC history.

Etienne snapped a six-game streak without a 100-yard rushing game.

Etienne’s 12.4-yard rushing average was his 13th career game averaging at least 10 yards per carry (minimum five carries), adding to his FBS lead in that category since 2000.

On a fourth and one, Etienne scored on a 44-yard touchdown run with 21 seconds remaining in the first half.

With the score, Etienne added to his FBS record for most career games scoring a touchdown, scoring in a 45th game of his 54-game career.

Etienne (4,943) moved past Kyle Parker (4,902) to move into the Top 10 in Clemson history in yards of total offense, a category that includes both yards rushing and yards passing, despite having only 23 career passing yards.

Rodgers scored Clemson’s first points of the game on a 67-yard touchdown reception from Lawrence on the Tigers’ second drive. The reception was the second-longest in ACC Championship Game history.

The touchdown was Rodgers’ sixth career touchdown of 50 yards or more (including five receiving and one via punt return), tying him for eighth-most by a Clemson player since 1950.

Wide receiver E.J. Williams recorded his second touchdown of the season on a 33-yard touchdown reception in the second quarter.

Williams’ four receptions for 80 yards were both career highs.

Skalski recorded his first full sack of the season on a third down on Notre Dame’s first drive.

Clemson recorded six sacks. Clemson has now recorded multiple sacks in 33 of its last 34 games, including each of its last 17. Clemson’s 17th straight game with two or more sacks ties a 17-game streak from 1998-99 for the Tigers' second-longest streak since 1980.

Clemson’s six sacks tied for the most in ACC Championship Game history, matching Florida State’s six in 2005. Clemson’s previous best was four, set against both Virginia Tech in 2016 and Miami (Fla.) in 2017.

Clemson (44) reached 40 sacks on the season, giving Clemson at least 40 sacks in seven straight seasons. Clemson’s seven-season streak is the longest in the country.

Defensive end K.J. Henry and cornerback Derion Kendrick recorded sacks on back-to-back plays in the second quarter. The sack improved Henry’s season sack total to 3.5, while the takedown was the first of Kendrick’s career.

Greene’s half sack was the first of his career, as he became the 20th different Clemson player to record at least half a sack this season, the most in the FBS.

Greene later added a full sack in the third quarter, forcing Notre Dame quarterback Ian Book out of bounds on a scramble for a two-yard loss.

True freshman linebacker Trenton Simpson later matched that mark, recording his fourth sack of the season in the fourth quarter.

After surrendering an opening field goal, Clemson scored 24 consecutive points to hold a 24-3 lead at halftime. In Clemson’s six consecutive ACC Championship Games since 2015, the Tigers have recorded a cumulative 146-50 halftime lead, an average lead of 16 points per game.

Clemson played a third matchup of two AP Top 10 teams in a single season for the fourth time in school history (three Top-10 matchups each in 2013, 2015 and 2016). It joined the 2013 season as the only seasons in school history that Clemson has played in three games between Top 10 teams prior to bowl season.

With its second meeting with Notre Dame this season, Clemson played a team twice in a single season for the third time in school history. Clemson dropped two meetings with Georgia Tech in 2009 and swept two meetings with Virginia Tech in 2011. With the win, Clemson split a two-game single-season series with an opponent for the first time.