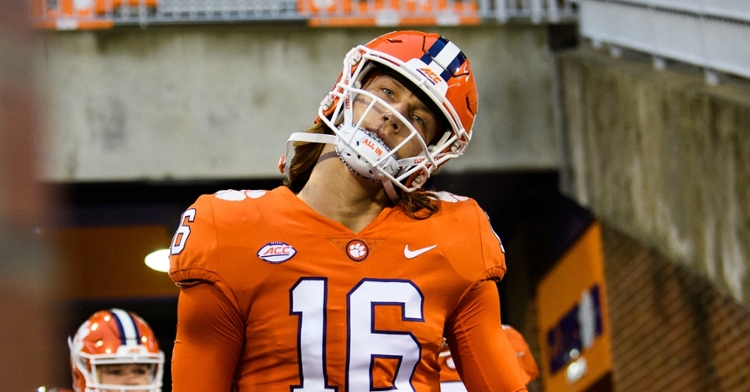 This week features a truly historic matchup that's just in part about the win-loss category.

As of publishing time, Clemson is a 46-point favorite over Syracuse. That is the largest the Tigers have been a favorite over a fellow FBS team and the most points the Orange have been an underdog by.

The last time Clemson was in this range was as a 39-point favorite over Louisville in 2018, where they comfortably topped that spread with a 77-16 home win.

How did we get here? Well, an offseason like no other and a tough start to the season has rendered Syracuse well under the 85-man scholarship limit -- Syracuse.com having the count under 60 ($) for their latest game in a 38-21 home loss to Liberty. That includes All-ACC honoree safety Andre Cisco and starting quarterback Tommy DeVito.

Oh, and Clemson’s off to as complete a start as any team in the nation.

You can see the disparity in the teams below, where ESPN efficiencies have Syracuse among the worst offenses playing right now and the SP+ metric factors in expectations for teams yet to play as well:

(*Out of teams with a game played. SP+ is a metric from ESPN's Bill Connelly, formerly of Football Outsiders and SB Nation, that combines ratings for the five factors of efficiency, explosiveness, field position, finishing drives and turnovers. ESPN’s own measure follows a similar formula to measure team efficiency and is tied to the ESPN Football Power Index.)

The redshirt senior is really up against it this week in his first road start. The makeshift (to be kind) Orange O-line has allowed more sacks than any team in the nation (24) against a Clemson defense that ranks second nationally in sacks (22). Grading 60.7 overall, Culpepper is 1-of-7 on passes under pressure and 6-of-13 when blitzed for 47 yards with a touchdown and an interception. Clemson coach Dabo Swinney has warned of Syracuse’s deep passing game this week and Culpepper has connected on six passes of 15-plus yards in his 27 completions (two of 25+).

Williams was limited reportedly due to injury in the loss to Liberty but he is the highest-grading defender for the Orange (74.9), with a 78.7 mark in coverage. Williams picked off a pass and took a lateral for a touchdown on another to earn ACC player of the week honors in their lone win over Georgia Tech.

The freshman (5-10 202) has managed to find some room to run and earned ACC player of the week honors against Georgia Tech with 112 rushing yards and two touchdowns, including 77 yards after contact. He is leading the Syracuse offense with a 74.5 grade -- 76.8 as a runner -- with seven attempts for 10-plus yards.

Sean Tucker will not be denied! ??

(Grades and advanced stats per Pro Football Focus; Some situational stats per CFBStats.com)

Trevor Lawrence is leading the Heisman race ahead of more Power 5 programs joining the fray in the coming weeks, but Alabama’s Mac Jones is starting to gain some steam among media and analysts:

Is Mac Jones trying to pull a Joe Burrow 2.0?? pic.twitter.com/agAc033jTM

The difference in the race this season? How much better Lawrence is now versus this point last year (five games):

After ample hype in recent years, Lawrence is grading above his season averages for previous seasons (92.5), including over six points higher as a passer than 2019 (92.7 versus 86.2). Even with some limited second-half action so far, he is averaging almost three more completions of 15-plus yards than last year (8.4 per game; 3.2 of 25-plus).

An area for improvement early? Even for some of the early turnover issues last season, Lawrence still graded at 75 under pressure with a 48.8 completion rate and nine touchdowns to two interceptions. While he is holding a remarkable 95.1 grade without a hand in his face this campaign, he’s only completed 29.2 percent of his passes with a touchdown and a pick under pressure this year (53.4 grade).

Overall, Lawrence (92.5) and Jones (93.8) are right there in PFF’s grades and Lawrence seems a little more impressive right now in doing so with a Clemson receiver corps still trying to find its way.

Factors beyond what metrics can measure certainly play a role in a historic spread for this one. Understandably, they are not taking Clemson against that gigantic number, but just how wide the margins are with the data they have speaks volumes.

With the 39-point Clemson-Louisville spread in 2018, then SB Nation-sponsored metric SP+ picked the Tigers by 34. This time around, SP+ takes Clemson by 39.

ESPN’s FPI projects a slightly larger margin with Clemson 40 points better even without some home field advantage factored in.

Rare lately, FEI is nearly in agreement with SP+ on a Clemson game and picks a 38-point margin.

Clemson holds the keys here in just how much they want to win by -- just like last week where 73 could’ve just been the start if they wanted more with starters playing longer. There is a bit of a misnomer on Clemson performing against bigger spreads, as going into the year they had done the best ATS in the last five seasons with 30-plus margins (63 percent). Another “show and go” game could mean the Clemson offense and defense in the right gear again versus a depleted Orange program.