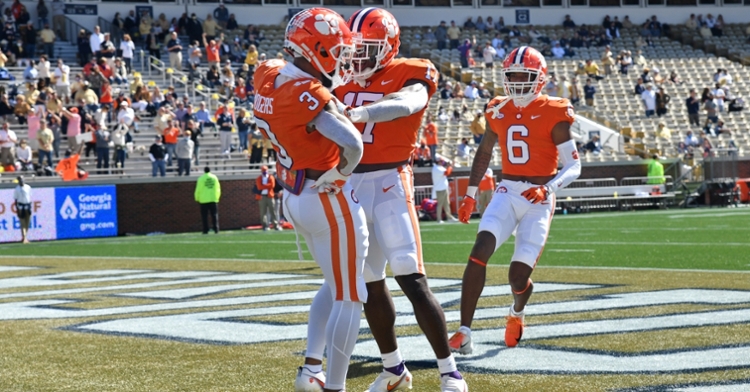 Shock and awe? Tony Elliott doesn’t have a name for his big-play offense but admits that given the Tigers’ ability to make big plays, a moniker might just help his players take more pride in their accomplishments.

Through five games of the season, there is plenty to take pride in.

The German Army used the term blitzkrieg (lightning war) to its advantage in the early stages of World War II, and the term shock and awe has been use since the time of Sun Tzu and the Roman legions. Either term might fit with what the Clemson offense has achieved, ranking second nationally in long plays from scrimmage (10 or more yards) with 96. BYU leads the nation with 100 such plays.

Clemson finished second in the nation last season in the category, with 283 (LSU had 303). That was over 15 games, meaning the Tigers averaged 18.67 long scrimmage plays per game. This year that average is 19.2, so the team is slightly ahead of last season when they had two big-play receivers on the outside in Tee Higgins and Justyn Ross.

“We don't have a name for it, but that might be a good idea. That might be something we can come up with and the guys might take pride in that,” Elliott said. “But we just talk about being explosive. Part of our plan to win that we talk about every week is to have more explosive plays than our opponent. And we also chart that.”

The coaching staff has an easy metric to use for “chunk plays.”

“We want to have at least four in the running game and five or six in the passing game,” Elliott said. “Again, that is 16 yards on a pass and 12 yards on a run. So, we talk about that and put an emphasis on that. I think part of it is when you are fortunate enough to have guys at every position, the defense has to kind of pick what they want to stop.”

Clemson rolled up 671 yards on the Yellow Jackets in a 73-7 victory Saturday, and that included 11 plays in the first half that fit the criteria for a chunk play. The Tigers also had the first 80-plus-yards from scrimmage in the win with an 83-yard touchdown pass from Trevor Lawrence to Amari Rodgers.

“And going back to last week, I felt like they were committed to stopping the run,” Elliott said of the Georgia Tech defense. “They were gapping us out and they were popping backers (linebackers) on the inside trying to create 1-on-1 matchups, which put you (the defense) vulnerable in the passing game and creates some space. I think you have to respect the fact that we can run by you creates an opportunity for the ball in space and when we get the ball in space our guys have done a really good job of breaking tackles and creating those explosives (plays).

“I think people have to figure out how they want to defend us and when you are able to run the football and when you have a tight end that can create matchup problems and you can have all the skill we have at wideout, that creates a lot of space and our coaches have done a great job of helping us put a great plan together each week where we can go attack what we see on film in terms of space. And our guys have done a good job of when they get the ball, just being tenacious runners after the catch and the backs breaking tackles, especially Travis (Etienne).”