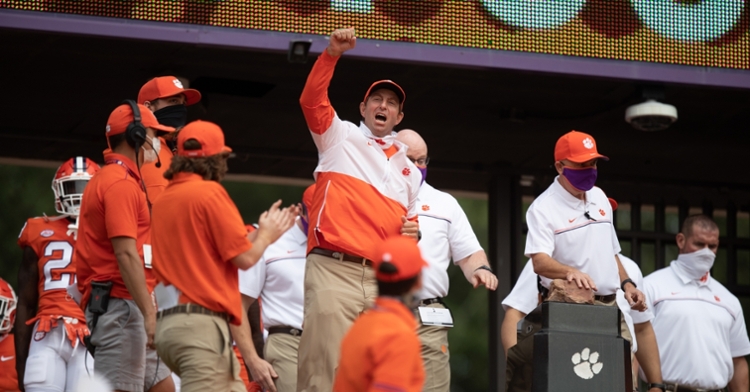 Clemson head coach Dabo Swinney at the top of the hill Saturday.

CLEMSON – Top-ranked Clemson defeated The Citadel 49-0 Saturday in Death Valley, and players and coaches met with the media following the win.

Here are quick recaps of each interview:

*Said he was pleased because The Citadel has been known to get after people. They were able to play a lot of guys early on, and guys showed great awareness and a sense of urgency that is needed to play against a group like this. The option won’t help you down the road in some ways, but there are things that will help every single week and make them better.

*Venables says that Myles Murphy comes with great maturity. He is a smart guy and understands football. Well-coached in high school and played at a high level and comes from an outstanding football program. He brought great fundamentals. Fast. Twitchy. Sees things quickly. Understands block recognition. Things aren’t new for him in many ways.

*Looking forward to preparing for Virginia and their staff. They are doing things the right way. Excellent spread offense with a lot of motion. They have excellent play callers. After the open date, Clemson will have six straight ACC games and that will be a big challenge.

*Fans and event staff were wonderful. Felt like there was a sense of normalcy.

*So happy for James Skalski, was like Conor McGregor last week at Wake. A tireless worker. Very passionate. Has great respect for the program and the standard with former players and he doesn’t want to let anybody down. He wants to make everybody better and has turned into a great leader.

*On his son Jake leading the team in tackles: "He is a hard worker and deserves the opportunity to play. He is a great teammate and comes to work every day."

*Last year he botched a fumble recovery and was happy to get this one. Credited Myles Murphy with making the play – he just scooped and scored.

*As long as they do what they can do, they will be hard to beat. The shutout is great but that is never good enough.

*He can remember when he was a freshman and saw Dexter Lawrence and Christian Wilkins and the new guys remind him of those guys. He said, “We have some dudes up front that can cover you up. That is all you can ask for, is when a guy pushes you to be better.”

*Making strides as a team. They are really young, but the ceiling is really high. He is excited to see how far they can go. He will keep being a leader and keep it honest and that is the only way they will get better.”

*For his mom to be able to see him make the play is an incredible feeling. He said she has always been his biggest fan. He was happy to play in front of his friends and family.

*He said he has been following leaders like Mike Jones and James Skalski. He has been preparing for this.

*Grew up as good friends with Corey Crawford. Said Corey told him to just take advantage of his opportunities.

*This was his first time playing the option. Most schools in high schools go with the spread.

*Said Clemson is the school he always wanted to be at. He waited on the offer because this is the place he wanted to play.

*Had two uncles and his mom and dad and brother in the stands to see him play. He threw a heart to his mom when he scored his first touchdown.

*Loved making plays with his legs. In high school he really wasn’t asked to run. Loved the fact that he was given the fourth drive – it was scripted – and is thrilled he was able to put it in the end zone.

*Happy to play against another team and take live bullets and live reps.

* Elliott said the expectation for the offense doesn’t change over the game and people expect Clemson to be Clemson. Elliott said the video from the second half will be a good opportunity to teach off of it and there was an expectation to finish better after a strong effort from the first team.

* Elliott says Trevor Lawrence’s consistency at a high level stands out. Just one bad play all year and he’s in complete control and one step ahead of everybody on the field.

* Going back to the LSU game, Elliott says the game wasn’t all on Lawrence but he responded as a competitor from that game going into this season.

* Elliott says he can’t wait to watch the tape with the backup offensive line and he doesn’t feel like second-half issues were all on that group.

* Elliott said there were high expectations on Frank Ladson, and dealing with a setback with the protocols in camp, it was good to see him break out on Saturday.

* Elliott says he doesn’t have concerns on goal line offense and short-yardage in runs. They’re just early in the season and trying to develop a mindset there.

* Elliott said DJ Uiaigalelei is reminiscent of former Tiger QB Tajh Boyd as a runner and Elliott says it’s good to get back to those roots in the offense with that kind of run.

* Elliott says the focus will be mostly on the team in the bye week, especially with no new video on Virginia until next Saturday when they make a season debut.

* Lawrence said it was good to be back in Death Valley and he said there is no better place that’s handled the atmosphere like Clemson during the pandemic. Felt a little different but not that much different.

* Lawrence said the first group owned the plan and it was a fun day. Probably his most efficient game.

* Lawrence says his mindset and the little details of the game are keys to his success this year.

* Lawrence says he didn’t have any major technique changes over the offseason. He said getting more reps this offseason helped out going into camp and they took advantage of the time in camp.

* He did switch to having his right foot back on snaps and it has helped him on quicker throws. He’s done better in post-snap recognition as well.

* Lawrence says there’s a diversity to the receiver corps with guys who are fast, big, tall and can block in addition to being receivers.

* Lawrence says Ladson’s versatility adds to the offense -- can run past defenders and is a smart player. He said there was good communication among him and the receivers over the offseason.

* Ladson said they felt like they could take some shots on The Citadel.

* Ladson said the atmosphere was great. Said it felt like there were more than 19,000 in there.