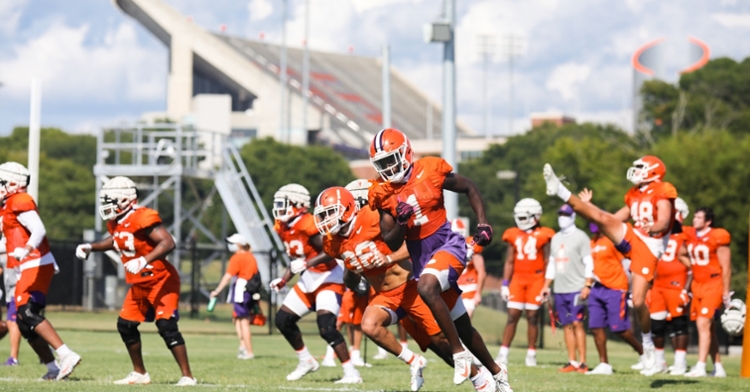 The first “road trip” of the season happened Wednesday as the Clemson football team moved from the new turf and grass fields behind the football operations center to the spotty grass environs of Jervey Meadows.

Head coach Dabo Swinney likes to move the team to the Meadows at some point during camp to not only give the regular practice fields a break but also to simulate going on the road by putting the players in a different environment.

The practice was held in shoulder pads, helmets, and shorts, called “shells.” The full pad practice starts today. While the media is not allowed on the practice field due to COVID-19 restrictions, there are nuggets we can glean from the B-roll practice videos released by the school.

*It’s fun watching Tyler Grisham coach wide receivers. Grisham brings a different perspective than former wide receivers coach Jeff Scott. One of the things I enjoyed watching with Scott was how he coached the finer points of the game, and offensive coordinator Tony Elliott told us Tuesday that Grisham is much the same way.

"Really excited about Grisham and his opportunity to teach those guys," Elliott said. "I think he's got a skill set and a demeanor about him that's a little bit different than Jeff. And Jeff did an unbelievable job— we all know that. We wouldn't be WRU without Jeff. But I think Grish brings a little bit of a different aspect to it and has really taken the coaching, and you're seeing [players'] technique improve.

"Grisham played at the highest level, so he actually played. He's got a slot's mentality, an underdog mentality. So he's always had to rely heavily on technique. So that's probably the biggest difference I would say right there is just a very, very technical, technical guy. And he's hungry. He's got a lot of energy because this is his first opportunity. Very, very passionate. So the guys have really taken to that.

So the biggest thing is he's a technique freak, and these guys are absorbing all that information and trying to transfer it from the things that they're doing individually and to the team segment."

*There is one point in the video where you see Elliott putting his running backs through their paces. That, my friends, is a good looking group. Start with Travis Etienne and then you have Lyn-J Dixon, Chez Mellusi, Mikey Dukes, Darien Rencher, Demarkcus Bowman, and Kobe Pace.

Elliott said he loves the “juice” of Bowman.

"You know Demarkcus is as advertised running with the ball. He's got the juice in his legs and he can really, really go," Elliott said. "The biggest thing is you go back and watch him in high school and you understand the program he came from... kind of a totally different philosophy. They were huddle, slow-pace, quarterback ran to the sideline. The biggest thing for him right now is getting adjusted to the communication of the play call. But he understands football. He's got a great understanding."

Of course, we all know that no matter how good a running back is at running the ball — he won’t play for Elliott unless he can pass block.

"First couple of days were in shorts and we're just now getting to the pads, and we're still continuing to install," Elliott said. "I'll be able to talk more about his pass protection later on, but right now watching him run around, he's everything as advertised in terms of his speed and natural ability to run. Now it's just a function of me doing my best coaching job of helping him understand the term, language, because I know he understands football. When you're putting in two or three protection calls a practice, and he's trying to learn how to communicate from a signal process as opposed to a huddle process, it's a little bit of a challenge."

*The Tigers held the “WIN” drill Wednesday, which is more 1-on-1 work with the OL going against the DL, the tight ends and linebackers going head-to-head and the wide receivers going up against the defensive backs. There was a point where Bowman got the ball, faced up to a defender, planted both feet in the grass and jumped to the side before resuming running. Early returns from what we are hearing is that he just has that “it” factor. Can’t wait to see how he does in the first scrimmage.