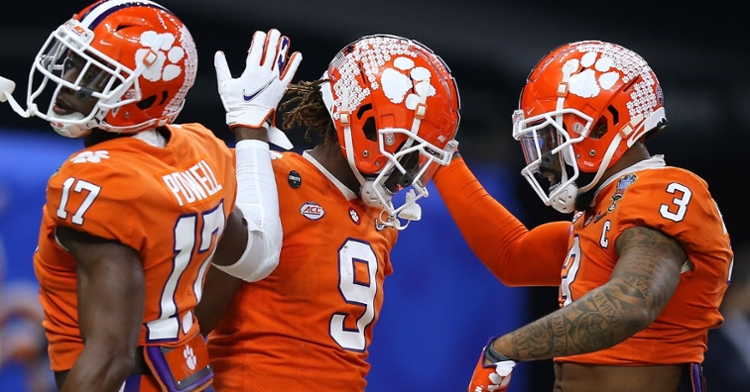 Etienne had to make a bigger impact outside the hash marks as a receiver. (Sugar Bowl photo)

Continuing our look at the Tigers’ season position-by-position with the running backs:

David Hood: It’s hard to make a lot of sense of just how Clemson’s running backs performed in 2020. We knew that if Travis Etienne even came close to replicating his production from 2019 -- he would set a lot of big-time records. He did set records but failed to rush for 1,000 yards (914) and averaged a career-low 5.44 yards per rush. That’s almost two yards per rush worse than his previous low (7.18 in his freshman season). Was it because Etienne was injured late in the season or because the offensive line struggled or because defenses loaded up to stop the run? Probably a bit of all three. He also averaged a career-high in carries per game, but that 14 carries per game is still far lower than most top backs.

For instance, North Carolina’s Michael Carter and Javonte Williams of North Carolina each averaged more carries per game than Etienne in a system where the two backs split the carries. They also both gained over 1,000 yards. Etienne was used more in the pass game and had 588 receiving yards, but I will forever wonder what numbers he could have achieved if he had gotten the number of carries other backs receive.

Behind Etienne, it was mixed success even though Chez Mellusi and Lyn-J Dixon flashed at times. We didn’t see enough of freshman Kobe Pace to really form an opinion, but we will see a lot of him in the spring. Freshmen Will Shipley and Phil Mafah have the chance to make an impression next fall.

Brandon Rink: Among positives, Etienne continued his progression as a receiver to outpace the nearest Tiger receiver by 11 grade points on PFF (90.9; top-10 nationally) with a 13.5 yards after catch average and two touchdowns in 48 receptions.

To put in perspective the drop in Etienne’s effectiveness as a rusher, however: last year he led the nation in PFF’s rushing grade (92.4) with 7.8 yards per rush and 5.1 yards after contact. Etienne’s solid-yet-unspectacular 2020 mark didn’t register in the top-50 with 3.8 yards after contact. He averaged 2.3 10-plus-yard runs a game in 2020 after 3.1 per in 2019. Like David said, a struggling offensive line and tight end-blocking group take on a share of the blame, as well as late-season wear-and-tear and defenses loading the box (although defenses loaded the box in previous years too).

Those blocking issues, and the drop-off to a young second group on the O-line, makes it tough to judge the backup running backs, but Dixon was another Tiger back to see a step back in effectiveness. His yards per carry average has dropped each season, going from 8.8 as a freshman to 6.1 as a sophomore to 4.5 as a junior. Beyond Dixon, Mellusi flashed at points and there wasn't much opportunity in the shorter, odd season for Dukes, Rencher and Pace to analyze.