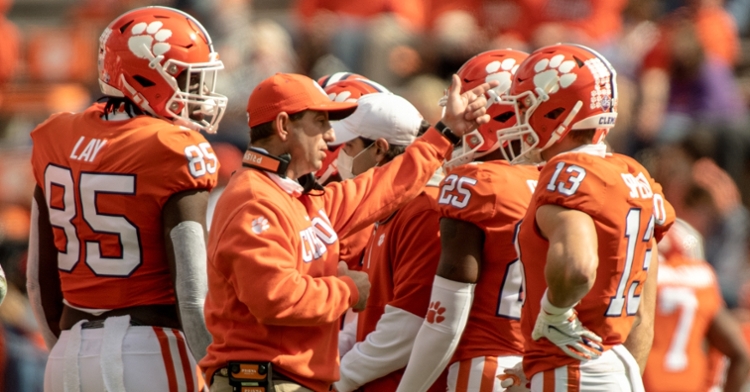 Swinney talks to the receivers during a timeout Saturday. (Photo courtesy ACC)

Following the replay officials’ review that confirmed a late first-half Boston College touchdown, the outlook for No. 1 Clemson was bleak. When the call was relayed over the loudspeaker system, many fans threw up their hands in disbelief.

At that point, the Tigers were down 28-10 with just over a minute remaining in the half. Three defensive starters were missing – middle linebacker James Skalski, outside linebacker Mike Jones, and defensive tackle Tyler Davis. Several other defensive players have been nicked up. Reserve cornerback Fred Davis was out.

Wide receivers Frank Ladson and Joseph Ngata were both missing in action. Justyn Ross is sidelined for the season. Starting quarterback Trevor Lawrence was watching the game from his apartment. Reserve running back Chez Mellusi was out.

Starting for the Tigers? A true freshman quarterback named DJ Uiagalelei with plenty of upside and all the physical tools. Still a freshman, however.

This had all the makings of a game that Clemson would lose. What happened? The banged-up defense stiffened and held Boston College without any points in the second half. The true freshman shined. Travis Etienne set records. Cornell Powell made plays. Bryan Bresee forced a safety.

And Clemson walked out with a 34-28 victory on a sun-splashed afternoon, giving the Tigers the largest comeback in the storied history of Death Valley. Clemson’s largest comeback victory in Death Valley prior to Saturday had come in 1966, when Clemson turned a 17-point 35-18 deficit into a 40-35 win against Virginia.

“First of all I want to congratulate Boston College. What an awesome job they did. Those guys played their tails off. Jeff (Hafley) had them ready. They played a really, really hard-fought game,” head coach Dabo Swinney said after the game. “I knew they would. I told our team this week I thought it was the best team we had played to this point. You can see the confidence in them.

“But it’s about our team. I’m just so proud of them. What you saw today is uncommon. We talk about being uncommon. What you saw today is not the norm. It is uncommon. It is the epitome of team and to be honest, what I saw was inspiring. It was just inspirational to see perseverance, to see guys fight, to overcome, to not quit, to stay together, to keep playing, to not flinch. Just an unbelievable game. Unbelievable game. I got my first win against Boston College 12 years ago tomorrow on November 1. I will never forget that one and I will never forget this one. That’s two I will never, ever, ever forget.”

Swinney said the comeback shows the character of his team.

“In this one, we get down 18 points. I knew we were going to see history today, I just didn’t expect it to be that kind of history,” Swinney said. “To have the largest comeback in the history of Death Valley, that means you have to get down a lot of points. That part wasn't fun. A lot of mistakes, a lot of miscues. But there is a reason why this is the largest comeback ever - because usually when you get down like that you don't win. So I am really proud of our team. You saw our heart, you saw our character, you saw culture, you saw our belief. It was special. Just a special, special game to be a part of.”