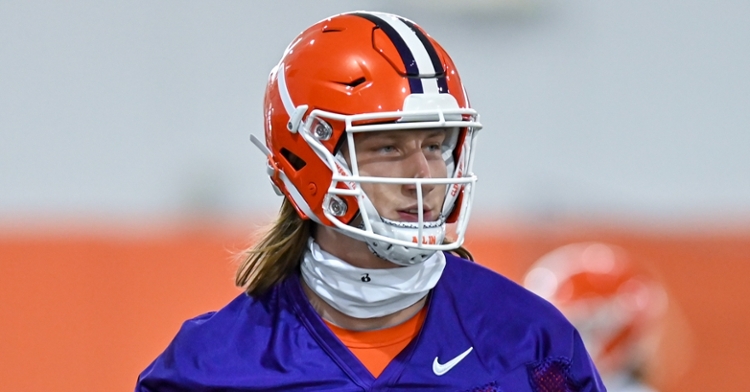 Clemson quarterback Trevor Lawrence has been ruled out for the top-ranked team's game at No. 4 Notre Dame next Saturday.

Tigers head coach Dabo Swinney said Lawrence could be out of the isolation period for COVID-19 from ACC guidelines but that the cardiac-evaluation element and re-acclimatization process afterward rules Lawrence out for the game.

"He's doing great and Zoomed with the team and talked to him this morning," Swinney said. "He feels like he could play today. He's doing well but obviously there's a protocol in place. He will be out in time to play but then you have the cardiac part of it to kind of ramp back up. Even if he feels great and could probably go play, he's not allowed to do that simply because of the protocol put in place. And that's put in place to make sure that he can play safely...He won't be able to get through that in time to play next week. But hopefully everything will go well and he will get back to practice after the Notre Dame game. Be ready to get back at it for Florida State."

The Tigers and Fighting Irish are set for a 7:30 p.m. broadcast start next Saturday on NBC.

"We hate that for him (Lawrence)," Swinney said. "Hopefully he will be able to travel with us still and be able to help those guys on the sideline but definitely will not be able to play in the game. Will be good to have a whole week with DJ (Uiagalelei) and Taisun (Phommachanh) and get them ready to go up there and build on this game here."

The freshman 5-star Uiagalelei completed 30-of-41 passes for 342 yards and two touchdowns in a 34-28 win over Boston College on Saturday in his first career start.

Clemson will have a bye week after the game next week and then play at Florida State on Nov. 21.