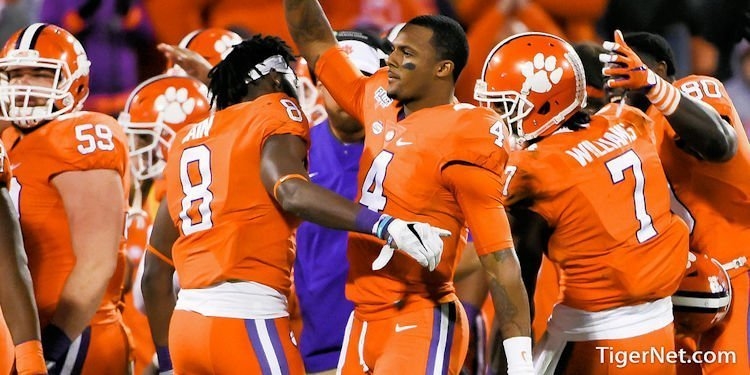 Watson getting a standing ovation by the Clemson crowd

Rivalry week is upon us as No. 4 ranked Clemson (10-1) and South Carolina (8-3) will face off in the Palmetto Bowl at Williams-Brice Stadium on Saturday at 7:30 pm.

Several Gamecock players were upset when Clemson called two timeouts leading 56-7 late in the fourth quarter last season according to media interviews. The Tigers called the timeouts to give their home crowd a chance to give standing ovations to some of their seniors and players entering the NFL including standouts Deshaun Watson, Mike Williams, and Artavis Scott.

Senior starting senior Alan Knott has not forgotten about the timeout calls and thinks it was in poor taste by Clemson.

"The way they finished the game out last year was not good sportsmanship. But that's fine, we're going to get our revenge this year."

Gamecocks safety D.J. Smith hasn't forgotten about the timeouts by Clemson either.

"It’s kind of a motivation type deal. We see that score, 56-7,” Smith said via seccountry.com, “And we’re thinking, man, we can’t have that again. Then, they called two timeouts. … We remember that. It’s in the back of our heads."

Vegas odds have Clemson as a 14 point favorite as of Tuesday afternoon.

Gamecocks C Alan Knott on Clemson: "The way they finished the game out last year was not good sportsmanship. But that's fine, we're going to get our revenge this year."

Gamecocks C Alan Knott on 56-7: "We've kind of put it behind us. We're just looking for our revenge."