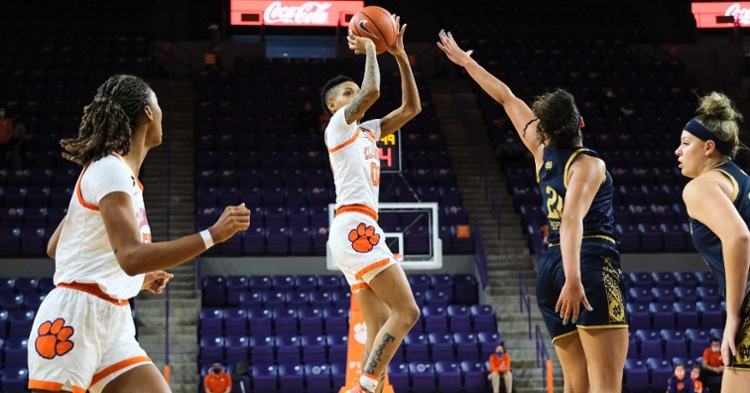 TALLAHASSEE, Fla. — For the second time on the season, a thrilling duel between Clemson and Florida State came down to the wire. While the Tigers had the upper hand in the matchup earlier in the season, the Seminoles pulled out a 95-88 win at the Donald L. Tucker Civic Center on Thursday, with the action-packed matchup requiring two overtimes in order to reach its conclusion.

In the double-overtime clash, Clemson (8-5, 3-5) shot 39.1 percent from the field, and the Seminoles (5-2, 4-2) generated a field goal percentage of 50.0. The Tigers made 36 field goals, three more than the Seminoles, and connected on four 3-pointers and 12 free throws. The physical contest included its fair share of fouls, and FSU went 24-for-33 at the charity stripe. Clemson came out on top off the rebounding margin 47-43 and scored 20 points off 23 Florida State turnovers. On top of pulling down 23 offensive boards, the Tigers tabbed 24 second-chance points. Furthermore, Clemson racked up 52 points in the paint, and the Tigers' bench contributed 21 points.

Early on, Washington knocked down a couple of jump shots, and Robinson completed a 3-point play, featuring a hard-fought layup. Hank put Clemson up 14-13 soon after that by sinking a go-ahead jumper. At the end of the hotly contested first quarter, Florida State led 23-18. Elliott scored the Tigers' final four points of the opening period, and she kept that momentum at the start of the second quarter. Not long after netting a trey, Elliott stole the ball and laid it in, giving the Tigers a 25-23 edge. FSU took a 37-33 lead into halftime and increased its lead over the course of the third quarter.

At the 7:07 mark of the third quarter, Mikayla Hayes scored a putback layup that trimmed Clemson's deficit to three points. A jumper by Hank closed out the third-quarter scoring, but the Seminoles sported a 59-49 advantage heading into the fourth quarter. The Tigers went on a 6-0 run to begin the fourth period, and a 3-point play by Washington with 6:43 remaining pulled Clemson to within one of Florida State. Spray gave the Tigers their first lead of the second half when she drained a three-ball with 4:10 on the game clock. Tylar Bennett, who finished with three blocks, helped set up the trey by blocking an FSU shot on the previous possession.

The 'Noles were able to retake the lead and go up by five with 51 seconds left. However, Clemson rallied, thanks in large part to a steal by Bennett on an inbound pass leading to a Washington layup. Washington's basket decreased Florida State's lead to one, and, following a pair of Seminole free throws, Elliott came up clutch by swishing a game-tying 3-pointer with 12 seconds remaining. The first overtime was a back-and-forth affair, and a jumper by Washington with 20 seconds left knotted the score. As time expired, a potential game-winner by Washington did not go down, and the second overtime began with the score standing at 82-82. FSU took advantage of multiple Clemson players fouling out in the final period and went on to win the riveting battle 95-88.

The Tigers will return home to Clemson, S.C., and play the No. 23 Syracuse Orange (7-1, 4-1) on Sunday, Jan. 24. Clemson and Syracuse will compete at Littlejohn Coliseum, with the contest scheduled to begin at noon and air on ACC Network.

"I was really proud of how tough-minded we were in this one, particularly the mentality we had going into the fourth quarter. We made great plays and extended the game."

On Gabby Elliott and Delicia Washington:

"They're two of the most dynamic guards in our league. Delicia scored a lot of points, but she also did a a really great job of playing within herself and making good decisions with the ball in her hands. She was concise and efficient in getting to her spots."

"Hannah battled and made some really big plays. There was an unfortunate call that took her out of the game, but she played with a lot of heart."

On her outlook moving forward:

"Offensive rebounding is something our team does really well. The thing we have to get better at is cashing in on those second chances. We're not getting enough return on that investment of energy."