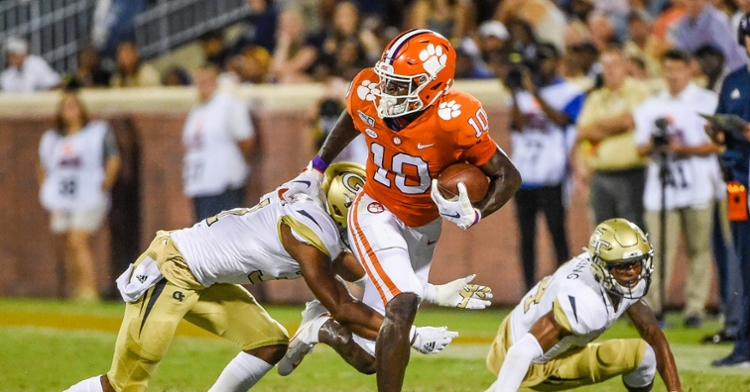 Clemson head coach Dabo Swinney spoke to the media Wednesday following practice and shared some injury news on his No. 4 ranked squad.

Swinney said that talented sophomore receiver Joseph Ngata had surgery this morning to give him some relief in the abdominal area.

"I can tell you that Ngata is out," he said. "He had surgery this morning, and we hope to alleviate some of the pain he had in that area. We are hopeful that by doing it now, we can get him back for the postseason. He tried to play through it, but we are hoping this will take care of it."

Swinney hopes that he will be back for postseason play, saying, "that's the goal for him."

For the season, he has seven catches for 83 yards.

In other injury news, Swinney said that he is hopeful that defensive end Justin Foster will return to action this season.

"We're hopeful. It's just been a process for him this fall," he said. "But man, one of the best leaders on this team. If there's any way he can get back and play, I promise you he'll do it. It won't be for a lack of trying."

Swinney said if he doesn't make it, he can return next season and turn this into a positive like Cornell Powell did when he redshirted his third season.

He also shared that the rest of the team is as healthy injury-wise as they have been probably since the first game of 2020.