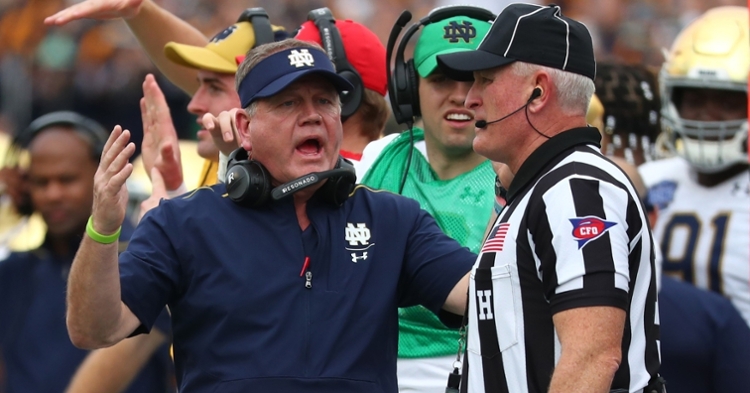 Notre Dame head coach Brian Kelly spoke to the media Thursday previewing the heavyweight contest between No. 1 Clemson and No. 4 Notre Dame on Saturday night.

During the media teleconference, Kelly was asked about the possibility of Clemson's defense stealing offensive signals on the sidelines.

“I think you have to be cognizant of it and be aware of it. We’ve lived it," he said. "We’re prepared for it. We’ve got to do a great job that we don’t tip anything off."

Clemson is currently a 5.5 point road favorite for the highly-anticipated matchup in South Bend.

This is the second time this year that reporters have asked about sign-stealing regarding Clemson.

Miami offensive coordinator Rhett Lashlee said the following back on October 6 as he prepared for his team's 42-17 shellacking against the Tigers.

"Clemson is known well for doing it, but so are a lot of other people," he said. "It's just part of the game. We have to be aware of it, but at the same time, we have to go play. There's nothing in the rules against stealing signals."