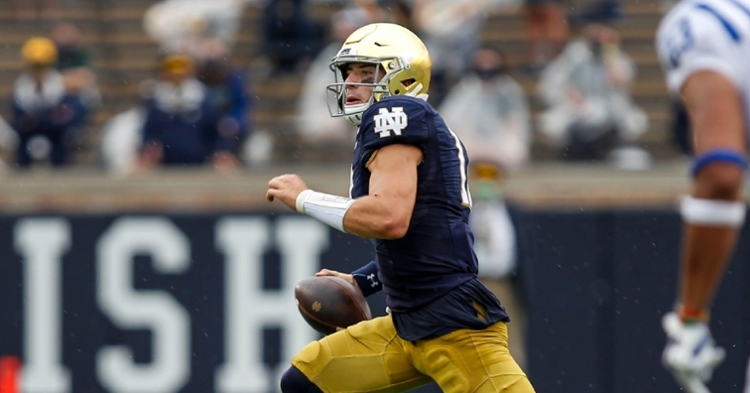 They do appear to be teetering between good and great in some aspects where we’ll find out more Saturday night, however (7:30 p.m./NBC).

Notre Dame holds top-7 ratings overall in three metrics we track here, ranking as high as sixth in the same area where Clemson rates as high as third (ESPN's SP+). After holding top-5 marks recently, the Tigers have slipped a little when it comes to offensive and defensive efficiency.

Here's how the teams compare:

Teams have stacked the line of scrimmage to help contain two-time ACC Player of the Year Travis Etienne and the Tigers are coming off a second-worst run grade (62.1) and worst run-blocking grade of the season (60.3) in the 18-point comeback win over Boston College.

Successful as a runner in that game? DJ Uiagalelei, who missed the week before with shoulder tightness, kept the ball on a read-option play and eased into the end zone from 30 yards out:

A big game under lights might just mean the QB-run game is a bigger feature, which can open up things for Etienne and play-action/run-pass options.

Going back to the Deshaun Watson era, he averaged 14 rushing attempts as a junior against ranked teams and eight in the other games. As a sophomore, the divide was even larger with 20 rushing attempts per in ranked games (109.8 YPG/5.4 YPC) against 10.7 in the rest (5.2 YPC/55.6 YPG).

The numbers weren’t as large when the two were freshmen, which probably speaks to developing that area of their game early. Clemson has already featured Uiagelelei in goal-line packages as a runner. His size and speed brings another element in that area and could be featured Saturday night.

As referenced up top, the metrics like both teams -- and therefore with Notre Dame on the home field -- they’re picking as close a pregame spread as there’s been in quite a while for a Clemson regular-season game.

With the Tigers favored by 5.5 points currently, ESPN’s SP+ picks Clemson basically by a point (1.2). The FEI metric is closer to three points in the Tigers’ favor (2.6). ESPN’s Football Power Index is more bullish on Clemson with a 65.9% projection (as a TD favorite on a neutral field).

After performing well against the Vegas number last year (11-4), last week’s close call dropped the Tigers to 2-4 versus the spread in ACC games. We’ll see if things start to even out Saturday despite missing some key defensive personnel again.