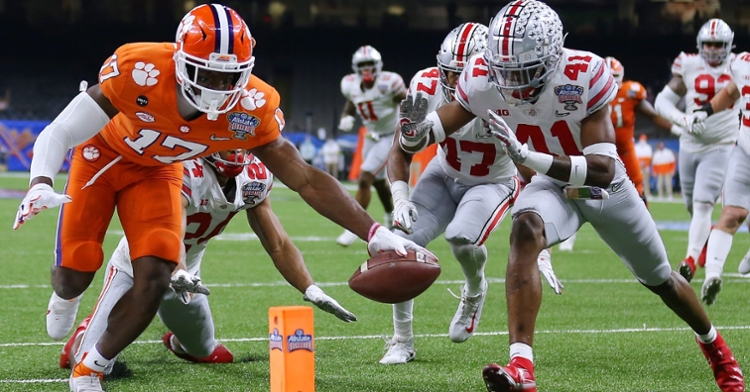 Cornell Powell scores against Ohio State in the Sugar Bowl.

There is a lot to unpack from Clemson’s Sugar Bowl loss to Ohio State, and while I had some thoughts at the end of the game, I wanted to reach out to coaches I trust and former players, and then take the time to watch the game again before forming some opinions.

The first thing anyone can do is give plenty of credit to Ohio State. They were motivated. They needed that win. The Buckeyes played better. All of that. Are they that much better than Clemson? Of course not. It was a good night for them and a terrible night for Clemson, nothing more or less.

What can't be taken away is just how poorly Clemson played in a lot of areas. Clemson is young on the back end of the secondary and they got exposed, but that shouldn’t be an excuse because this was the second season for some of those guys. On one of the long touchdowns that Derion Kendrick took a lot of heat for, it was veteran Nolan Turner who bit on the shorter route. As soon as it happened, a former Tiger texted me and said, “They were either in Cover 3 or quarters, and that’s on the safety.”

And, let’s face it, a lot of the coverage issues could be helped with a more dominant pass rush with the front four. It seems like the Tigers have had to blitz to generate pressure the last two seasons (without the Power Rangers) and that leaves other parts of the defense exposed.

Clemson is also smaller in spots than it have been in the past. This offensive line doesn't look like the 2018 (one Notre Dame writer told me in a conversation before the ACC Championship that the Irish referred to them as “stumpy”) nor does the defensive line. I watched Alabama and Ohio State and even Oklahoma and there are some dudes along the D-line, including tackles who resemble Bix Dex, in the 6-4, 6-5, 330-pound range. Clemson, to me, is shorter than they have been on both lines of scrimmage. There just aren't dudes there in bulk to push other teams off the line.

As for all of the rest of the defensive issues, it’s hard to tell right now (and I would love to hear the thoughts of Brent Venables, but he wasn’t made available after the Sugar Bowl). But it appears that Ohio State went tempo at times and seemed to have several different players calling in plays and the Tigers were once again caught trying to get into position when the ball was snapped. When defensive players are moving and looking at the sidelines when the ball is snapped, you see the issues where tight ends are running around with no one within 15 yards of them.

When it comes to size, this team will get bigger and better this offseason and the 2021 recruiting class will help. Myles Murphy will get there, and so will Bryan Bresee and others on the DL, and help is on the way.

Phil Mafah is underrated at running back. He is gonna blow your doors off. I know people love the pickup of Will Shipley, but Mafah is a stud at 6-1, 215. He reminds me of Bama running back Najee Harris, quicker more than he is fast but doesn't get caught in the open field.

This team will get a year older, and I look for DJ Uiagalelei to be a vocal leader as well as one of the top players in all of college football.

I am hoping that new leaders and voices emerge. One of my favorite memories from the 2018 title game was K'Von Wallace making a passionate speech before the game, just before the team left the field after warmups. I stood nearby and listened to Wallace implore his teammates to give their all. Swinney and Venables have each told us numerous times that the best teams have been player-led, and we’ve seen that over the last several years.

On Friday, it looked it was Coach Swinney was the one giving the speech on the field (which he does a lot of times anyway). But I think big voice needs to emerge, ala K'Von or Christian Wilkins or Clelin Ferrell.

My guess is there might even be a spot or two on the staff (coaches, support, all over) where Swinney takes a hard look at things. He doesn't settle for bad or mediocre.

But I also think the wide receivers will be much improved, even without Amari Rodgers and Cornell Powell. EJ Williams is a rising star, and hopefully Frank Ladson and Joseph Ngata will get healthy. Ajou Ajou is a freak of nature who will only get better. There is a chance that Justyn Ross is back. Troy Stellato and Dacari Collins will also help, and I think Beaux Collins has a chance to make an immediate impact. He is a former teammate of Uiagalelei and the two already have a connection, and I thought he was extremely polished when I watched him in person.

So, chin up. This roster is insanely talented. The babies didn't all play. Kevin Swint and Sergio Allen will make a difference at linebacker, and we didn't even see Tre Williams or Demonte Capehart. I love LaVonta Bentley (the kid is a striker), and others like corner Fred Davis and safety RJ Mickens should be ready to make an impact.

One bad night - and a tremendous night by Ohio State - doesn't define a program. If it did, this program wouldn't have come out of the ashes of the Orange Bowl loss to West Virginia. Or the 2013 loss to FSU.

Be patient. Trust the coaches. Give these kids time to decompress from a difficult season and all they had to go through, and they will emerge better on the back end for it. Last night will be a teaching moment, and leaders will emerge.

The defensive line will be even better next season, and the offensive line might turn into a strength. I, for one, would love to see Walker Parks earn a starting spot. I also think we might see some retooling at a few spots, especially in the interior.

And, as I’ve mentioned a few previous times here, I think new voices and leaders will emerge. Mike Jones and Myles Murphy were understandably upset during postgame interviews, and it took me back to Wilkins and Ferrell crying in a corner with Swinney after the loss to Bama in the Sugar Bowl. They both decided to return to win a title and they made it happen.

Swinney and the coaches will start the self-scouting process almost immediately, and you can bet that the losses to end the 2019 and 2020 seasons will be a motivating factor.

What we have now is time, and we will spend the next few weeks taking a deeper dive into the roster and looking back at last season while also looking ahead and how the roster shapes up for 2021.