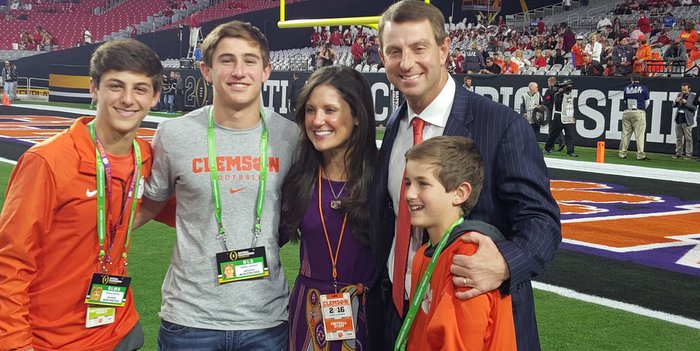 Swinney poses with his family prior to the National Championship

Prior to Clemson’s title game against Alabama last month, I stood on the sidelines as Dabo Swinney (still in a suit) exited the team bus and walked onto the field at University of Phoenix Stadium. Swinney looked up into the stands where a sizable contingent of Clemson fans were already in their seats, and a broad smile broke out on his face.

Like me, he was simply enjoying the moment because moments like that aren’t the norm. He grabbed his wife Kathleen and sons Will, Drew and Clay to take a quick photo, and then he came over to shake my hand before heading back into the locker room.

At that moment – at least in my eyes – he wasn’t the coach of a team preparing to play for a championship. He was once again the wide receivers coach I saw grieving on the sidelines following a heartbreaking loss, my first introduction to the man that I’ve now interviewed several hundred if not a thousand times.

In mid-November of 2007, I worked for one of the local papers and covering college football. On this particular day, however, I was working as a freelance writer for one of the Boston papers. It was only my second visit to Clemson that season, and I was looking forward to a matchup between No. 18 Boston College and No.. 15 Clemson. If you’re a Clemson fan, you remember every excruciating detail of that game – the crowd was trying to set a noise record, a spot in the ACC Championship Game was on the line, and the Eagles were led by quarterback Matt Ryan.

Back when I was working for a paper and didn’t have to publish a story as soon as the clock hit zero, I would head down to the field with the other writers with about four minutes to play. I made it to the Memorial Stadium sideline with about 3:50 to play. I staked out a spot, and it turned out I had maybe the best (or worst spot) on the field.

With just under two minutes to play and Clemson leading Boston College 17-13, the Eagles faced a 3rd-and-7 at the Clemson 43-yard line. The fans were on their feet and at full throat, but I watched as Rich Gunnell slipped unnoticed down the sideline in front of me. What happened next was in slow motion – Ryan’s lob pass seemed to hang in the air for forever, and as the ball settled into Gunnell’s hands the air went out of the stadium. It went from deafening to deafening silence in a split second.

The Tigers had one last shot, and a pass to Aaron Kelly into the Boston College endzone is forever etched into my memory. It was at that moment I noticed a young assistant coach almost come out of his shoes – it seemed he wanted the pass as bad as the players and fans. A fourth down completion of 12 yards from Cullen Harper to Kelly gave the Tigers hope at the Eagle 33 with 33 seconds to play. Two pass plays netted three yards to Tyler Grisham, but Harper was sacked on third down and Mark Buckholz missed a potential game-tying field goal.

Before the field goal, my eyes were once again drawn to the exuberant young assistant, the one who lived and died with every play. I asked another writer if he knew the name of the coach, and he said yes, it was wide receivers coach Dabo Swinney.

As the Buckholz kick fell short I began my walk towards the end of the field with the Clemson tunnel, and I saw Swinney, down on one knee, picking at blades of grass as players and fans swarmed the middle of the field. No one noticed the young, heartbroken coach as students and kids tumbled over the walls looking for gloves and sweatbands. After a few agonizing moments, he stood up and began the lonely walk into the tunnel.

Fast forward a year, and the powers that be at a website called TigerNet and I began discussions about my coming on board to help with coverage. My first day working for TigerNet I walked into a bombshell – Tommy Bowden’s last game and a few days later the naming of Swinney as interim coach. I joke with Swinney on occasion that we have the same work anniversary but nobody remembers mine.

Sixteen days shy of a year after the loss to Boston College, I saw that young wide receivers coach turned interim coach garner his first win. Against Boston College. We were all coming full circle.

In the years since those early days, I’ve been there for losses at places like North Carolina where he took full responsibility for the game. I was there for the loss at Florida St. where the playcalling was suspect, and he once again said he would fix it. I was there after the loss to South Florida in the Belk Bowl in Charlotte, capping a 6-7 season. With tears in his eyes, he vowed to fix it.

He hired Chad Morris to run the offense, and then hired Brent Venables to run the defense after the debacle in the Orange Bowl. He stood by his word and he fixed it.

On the field that night in Arizona I didn’t see the successful head coach. I saw the somber visage of a young assistant coach who had just watched a chance at an ACC Championship slip away. After the game, in the dark moments of interviews about the loss, the successful coach was back, handling the questions with poise and grace. If you can play to the media when you win, you have to do it when you lose. That night, he promised the Tigers would be back.

One of the first things he ever told me was, “The fun is in the winning.” Yes, it is. And it’s been a lot of fun watching the process, seeing a young, and inexperienced coach who had a plan and had the passion. For me, it started that night against Boston College. In many ways he’s the same, but in many ways he’s changed. We’ve all grown up with him.