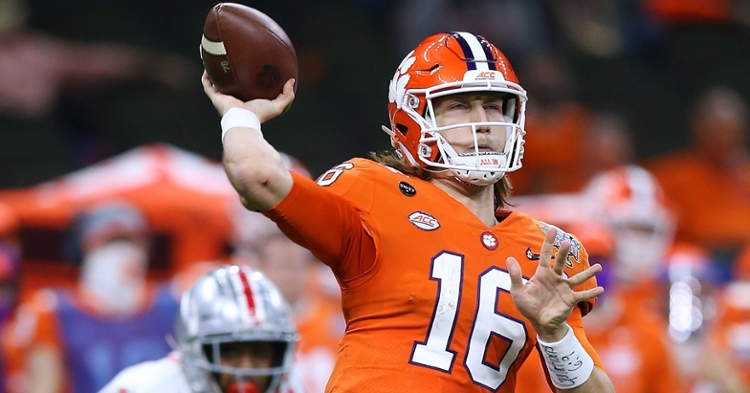 Lawrence ends his Clemson career with no regrets.

Trevor Lawrence (potentially) ended his Clemson career Friday night with an astounding 34-2 run, but unfortunately for the star signal-caller and Tigers, New Orleans wasn’t meant to be tamed.

With Clemson’s 49-28 loss to Ohio State in the Superdome, both of Lawrence’s losses have come in the Big Easy.

Lawrence finished the night 33-for-48 for 400 yards and two touchdowns, but it wasn’t nearly enough to keep pace with the Buckeyes who rolled up 639 yards of total offense. However, the Georgia native has no regrets about the game or his career.

“Yeah, just finishing with no regrets,” Lawrence said after the Sugar Bowl. “Obviously tonight didn't go well, but I know that the way I prepared, the way this team prepared, and then just this whole year, the way we've carried ourselves, I'm proud of it. I don't have any regrets. There's not much I'd go back and change. Like I said, just proud to be where I'm at. Proud of the man I've become over my time here. And just thankful for a lot of good people in my life. But, yeah, it's been a crazy year. 2021 hopefully looking a little bit brighter. Obviously not a great start for us. But, man, I'm super proud to be a Clemson Tiger for sure.”

Lawrence said he and his teammates didn’t prepare any differently in the days leading up to the game, but for a variety of reasons, neither the offense or defense could really get things going.

“Yeah, I mean, obviously going into these games, I think we prepared really well,” Lawrence said. “We had a good week and a half or so of practice. And you never expect that, obviously. We were confident. We had prepared, like I said. But in games like that, there's been times the defense has had to pick us up. And this was just one of those nights we -- yeah, we could have used a few more stops for sure, but they kind of needed us to pick them up. And there was a few times we weren't just playing complementary football for too long. When we're punting and they're scoring pretty much every drive for a quarter, it can get out of hand quick. We were kind of pulling in two different directions in that sense as far as just ball control.

“Ohio State, they played a heck of a game. You've got to give it to them, obviously. They kicked our butt tonight. I still love this team. Got a lot of confidence in who we are and super proud. Super proud to be at Clemson. And the year we had obviously didn't end the way we wanted it to, but it was special. Wouldn't have wanted to be anywhere else. But, man, just didn't get it done tonight for a lot of reasons. I mean, you can look back at the game and pick a few things.”

Even when it was evident the game wasn’t going to go Clemson’s way, Lawrence never considered giving up or not finishing the game. It’s just not in his DNA.

“I mean, that's just what I do. I'm not going to quit, no matter -- I believed to the very end that we had a chance to win it, even when we were in the red zone, fourth down right there,” he said. “Obviously after they intercepted it, didn't really have a chance at all there. But I was just trying to keep believing, no matter what. The whole group on offense didn't quit. Obviously didn't put a lot of scoring drives together in that second half but didn't quit.

“I think we moved the ball well. If you look at it, we threw the ball really well in the passing game, and running game had a few issues here and there. They do a really good job of stacking the box. But I think our receivers played well. Obviously, I missed a few throws and put too many balls on the ground for sure. So that's something I want to get better at. But, man, I don't really -- like I said, don't have any regrets. And obviously sucks to finish like this."

With a crazy, drama-filled season over, Lawrence is looking forward to spending time with his fiancé and family and not thinking about what the future holds just yet.