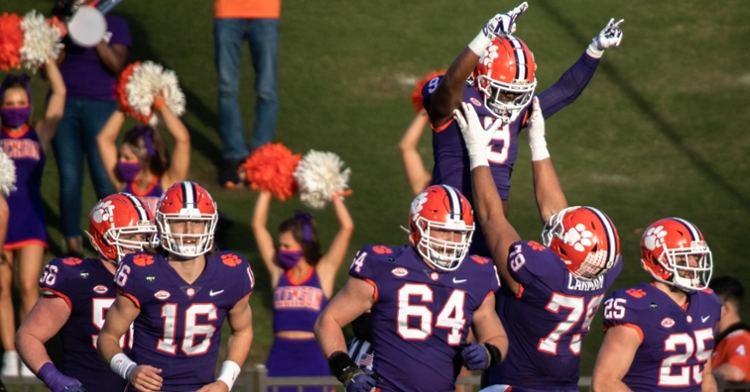 Offensive coordinator Tony Elliott met with the media Monday morning, and he said the game film shows better effort than he saw at first glance Saturday. That includes a better and more physical effort from the offensive line.

Clemson gained 581 total yards Saturday, its second-most this season. Clemson has now opened a season with 400 yards of offense in each of the first nine games of a season for the second time in school history (2018).

Clemson travels to Blacksburg to take on Virginia Tech Saturday at 7:30 (ABC). The Hokies were off last week. Here is what Elliott had to say about the win over Pitt and looking ahead to Virginia Tech.

*He says the OL won the battle at the line of scrimmage against Pitt. He said the film was much better than he thought Saturday. They gave up too many sacks and some of that was technique.

*Elliott said the offensive line got back to the basics. There were a few times when Pitt had more hats in the box than blockers but overall he is pleased with he effort.

*On Tyler Grisham, Elliott said that the first-year wide receivers coach has shown a lot of resilience. “He just comes to work every single day with the right attitude. He has a smile on his face and he coaches them hard. He has charisma and he’s detail oriented and he can teach those guys the details.”

*On EJ Williams, the coaches were “intentional” in trying to get him touches early in the game and get him involved. One of the passes was designed to go to Amari Rodgers, but Pitt switched up their coverage from a two-shell team to a one-shell and the pass went to EJ. EJ is a guy that isn’t going to say a whole lot, has a blue-collar outlook, and he loves the game.

*On Virginia Tech, he said the biggest thing that they don’t have is an exotic third-down package. A few base blitz packages and that is it. Virginia Tech looks all over the place, like they are searching for something that works, and he puts that on personnel and the fact that they have had to play a lot of guys. They have a lot of guys that play a lot of snaps, three linebackers that play a lot. It seems like maybe they don’t have a lot of the same players each week and they try to fit their scheme to the personnel they have each week.

*It is different going into gameday and not being able to see recruits. He says that his heart goes out to the recruits that need to make decisions and would benefit from having some interaction with the coaches, but the NCAA says no.

*Back to the offensive line, Elliott says he feels good about how they held up against a physical front in Pitt. He said they were knocking guys back and getting good fits with the linebackers. Pitt’s structure has linebackers going downhill fast and eating up the run blocks.