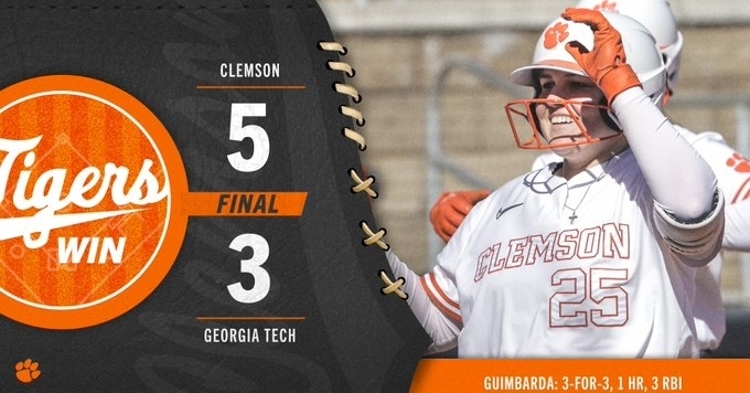 Clemson improves to 4-2 in ACC with the sweep. (Photo courtesy Clemson Softball)

In its first-ever conference road series, the Clemson softball team swept the Georgia Tech Yellow Jackets with three victories, including two on Sunday in a doubleheader, 5-3 in game one, and 5-4 in the series conclusion.

Clemson moves to 6-2 on the season and 4-2 in ACC play. Clemson will be back in action at home next weekend with a non-conference series against Elon. Game one is set for Saturday at 1:00 PM followed by game two of the doubleheader 30 minutes after. Game three of the series is set for noon next Sunday.

Overall, the Tigers recorded four wins and two losses after playing six games in four days dating back to Thursday. If anyone was wondering who the ace would be of head coach John Rittman’s staff, we found out this weekend. Valerie Cagle was dominant in the circle, appearing in all but one of the six games over the course of the ACC play on the opening weekend. The redshirt freshman went 2-1 and recorded two complete games against Georgia Tech in Atlanta.

The depth of the bullpen, which the Tigers lacked last season, was on full display in game one of the day, as Regan Spencer picked up her first collegiate start, and recorded her second win of the season. Fellow freshman Millie Thompson recorded her first collegiate save. This is the third game this season we have seen both freshmen enter the same game and work together to get Clemson the win.

The Yellow Jackets loaded the bases with two outs on Spencer, but a groundout ended the jam early in the middle game of the series.

Clemson, who was the designated home team in game 2, wasted no time getting on the scoreboard in the bottom of the first. Following an RBI single from Cagle, Guimbarda sent her third home run of the season over the fence and Clemson claimed a 3-0 lead headed to the second.

Guimbarda did not wait long to get back into the action, sending a ball down the left-field line for an RBI single in the third to increase the Tiger lead, 4-1.

Georgia Tech made it an interesting ball game, picking up runs in the fifth and sixth to make it a 4-3 ball game. Cammy Pereira gave Clemson the insurance run it needed with a solo home run in the bottom of the sixth. It was the redshirt senior's first long ball of the season.

Spencer and Thompson both continued their fine start to the season in the circle, combining together for three runs across seven hits and stranded 11 Yellow Jackets on the base paths.

Georgia Tech was once again unable to crack the talent of Cagle, as the right-hander recorded her fourth complete game of the season. The redshirt freshman struck out 11 batters and allowed only three earned runs across six hits.

Freshman McKenzie Clark is filling out the leadoff role spot very nicely for Rittman. She went 3-for-4 with two doubles, a home run and two RBIs in the series concluding game. Gilstrap also hit her first home run of the season in the third inning and Cagle hit her third of the season to open the Clemson scoring, 3-0.

The Yellow Jackets made it an interesting game in the bottom of the seventh, trailing 5-1. After loading the bases with two outs, a two-RBI double made it a one-run game, 5-4. With the tying run on third, and the game-winning run on second, Cagle forced a line out to short and Clemson claimed the sweep of Georgia Tech.

Dabo Swinney on his philosophy with the transfer portal
Post your comments! RunJumpCatch® Lowcntry_Tiger® DMDRanch rgby83®