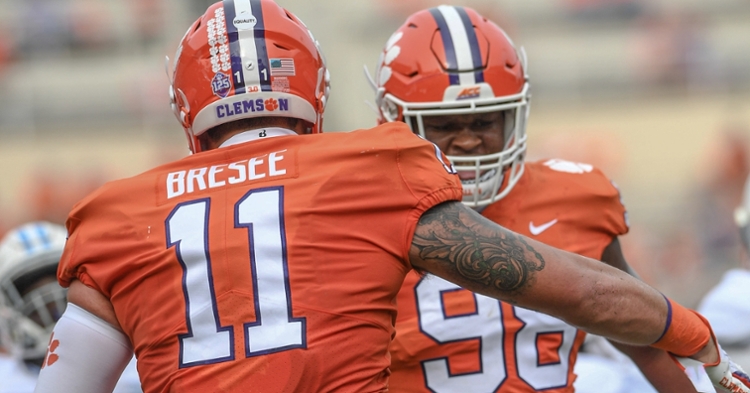 Safety Nolan Turner announced earlier this week that he would return for a final season at Clemson, meaning that defensive coordinator Brent Venables has all 11 starters back on defense next season. That’s great news for a group that finished No. 15 in total defense last season despite the challenges of COVID and replacing several key starters.

A legitimate question that we all have is will those same 11 be the starters in 2021? I remember watching a season preview for a certain SEC team a few years ago and the commentator mentioned that “all the starters” from a position group would be back that season. Another analyst quickly chimed in and said, “If they are bad, and this group is terrible, does that even matter?”

Which leads us to the question of how many spots are truly up for grabs and how many spots we think we can safely say have starters. And I’m not saying that any one player or one position group was terrible, but you can’t look through orange-colored glasses all the time and you have to realize that there are areas where the defense has to be better next season if the Tigers are going to make another run.

I feel like the truncated spring practice and lack of a spring game and then the lack of any sense of normalcy hurt the younger players on the defense. If you had a defense that returned a bunch of veterans at all levels of the defense then you had a good shot at getting through unscathed, but the Tigers were working new starters in at defensive tackle and defensive end, at linebacker (two spots), and in the secondary.

The secondary was a concern all season and the Tigers finished 41st overall against the pass. Clemson finished 8th nationally in 2018 in 3rd-and-10 or more yards to go, giving up just seven first downs in 50 attempts. Opponents gained first downs in that situation on nine of 31 attempts this past season.

What the secondary doesn’t lack is talent. What it did lack was consistency across the board. No one ever knew who was going to start at corner from one game to the next, with Derion Kendrick bouncing in and out of the love shack, Andrew Booth battling injuries, and Mario Goodrich missing time for unknown reasons.

A more normal spring and summer and another year under their belts should help ease a lot of the issues we saw. The defensive line will also grow up a little more. We can expect that Bryan Bresee and Tyler Davis will start at defensive tackle, but Ruke Orhorhoro and Etinosa Reuben are coming on strong, Darnell Jefferies can provide a veteran presence, and DeMonte Capehart and Tré Williams are looking to take that next step in their development. Add Payton Page to the mix and that group looks good on paper, part of the reason that both Jordan Williams and Nyles Pinckney transferred out.

Myles Murphy will start at one defensive end spot, but the other spot should be wide open. KJ Henry and Justin Mascoll had their ups and downs at the other spot this past season, and there were times when Regan Upshaw was pressed into playing a lot of snaps. A lack of depth at the end spots forced Venables into once again trying different defensive fronts and blitzing middle linebacker James Skalski with abandon.

There is plenty of good news on that front. There is a belief that Justin Foster – expected to start at one of those end spots last season – will be back and ready to roll by the spring. Xavier Thomas is also back for another year, and while I know a lot of people have questioned his work ethic and commitment after he missed time late in the season, I’ve been told that it was all protocol related. That’s two guys who are immediate impact players and can start right away. Whichever one doesn’t start can provide depth. And that’s not ruling out Henry or Mascoll – it’s simply saying as it stands right now I’d put my best bet on either Foster or Thomas.

Add in the leadership, experience, and talent returning at linebacker and the future for this defense is bright. How many teams can say they return all 11 starters, but there is enough talent on hand that not all 11 spots are guaranteed? That’s good stuff, and it can only help that all of the players will have not only been through grinder of a season and seen ACC Championships and College Football Playoffs up close, they’ve battled COVID-19 and all that has to go with that.

They’re baaaack. And that spells trouble for opponents.