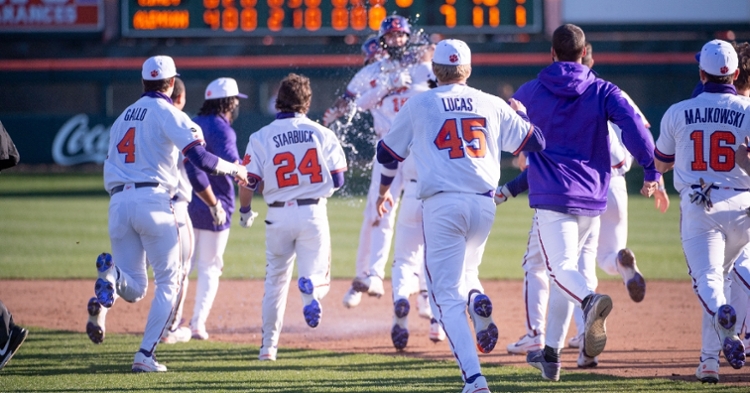 Parker is mobbed by his teammates after the game-winner.

CLEMSON – There’s nothing better than a walk-off single on a beautiful day early in the baseball season.

James Parker’s walk-off RBI single in the bottom of the 10th propelled Clemson to an 8-7 victory over Cincinnati Sunday afternoon in Doug Kingsmore Stadium, sending the Tigers to a three-game sweep in the season-opening series.

Clemson improves to 3-0 on the season while Cincinnati falls to 0-3.

The teams were tied at 7-7 heading into the bottom of the 10th. Dylan Brewer singled to lead off the bottom of the frame and moved to second on a single by Bryar Hawkins. The Bearcats made a pitching change, bringing in righty Zach Segal to face James Parker. Segal’s first pitch landed in the left-handed batter’s box and rolled far enough away for both runners to move up a base.

The Bearcats then took out their left-fielder and brought in a fifth infielder, hoping to cut off a run at the plate. Parker made that all moot when he hammered a 3-1 pitch off the base of the wall in left-center to score the winning run.

Parker was 2-for-5 with a homer and three RBI, while Jonathan French and Brewer each homered.

"Exciting way to finish up the opening weekend and winning in extra innings. Very, very proud of our ballclub," head coach Monte Lee said. "The young freshman, Caden Grice, struggled some, and we had to go to our bullpen early. I thought our bullpen did an outstanding job. Those guys threw the ball very well to keep us in the game and we didn't help them on defense. In the fifth, they put together a big inning and should have scored just one in that inning, and instead they scored three because we didn't catch a pop-up that would have ended that inning. But we kept plugging along and got the right guys to plate when it mattered most.

"Brewer led off the 10th with a single and Hawkins with a single, and then Parker - he's arguably our best hitter - I am surprised they didn't put him on base and pitched to him in that situation. But he delivered for us when we needed him the most. We had a big inning in the first and had some good at-bats. Sometimes you when you don't play your best baseball and that was certainly the case today. More on the defensive side. I thought we swung the bats very well and I thought our bullpen did a great job."

It didn’t take the Tigers long to score Sunday. Blake Wright led off the bottom of the first with a single through the left side on the first pitch he saw, and Dylan Brewer smacked a 3-2 pitch over the wall in left-center for a quick 2-0 lead. Bryar Hawkins was hit by the very next pitch and James Parker drilled a 1-2 pitch down the line in left in left. The ball clanked off the foul pole about halfway up, and Clemson led 4-0 early.

A walk and two singles led to two runs off of starter Caden Grice in the second, trimming Clemson’s lead in half to 4-2.

Grice pitched two innings in his first collegiate start, giving up three hits, two runs (both earned), while walking three and striking out two in his 44 pitches.

Jonathan French hit his second homer of the series leading off the bottom of the fourth, a shot down the left field line that gave the Tigers a 5-2 lead. Davis Sharpe was hit by a pitch, moved to second on an errant pickoff attempt, moved to third on a bunt by Elijah Henderson, and scored on Pierce Gall’s single up the middle as Clemson led 6-2.

Rasesh Pandya came on in relief of Grice and pitched 2 1/3 innings, giving up three runs on just one hit. The runs came in the top of the fifth, courtesy of a throwing error and a ball that dropped in short right, allowing two runs to score.

The Tigers got one of those runs back in the bottom of the fifth. Brewer walked to lead off the inning and advanced to third on a two-out single up the middle by French. Sharpe then doubled down the left-field line, scoring Brewer for a 7-5 lead.

Reliever Mack Anglin ran into trouble in the eighth. Two singles and walk loaded the bases with one out, and Paul Komistek’s bouncer to short scored one run, leaving runners at first and third and Clemson leading 7-6. Ben Santiago then singled up the middle to score a run, tying the score at 7-7. Lee went to the bullpen at that point, replacing Anglin with freshman Nick Hoffman, who got the final out on a fly to right and end the threat.

Hoffman picked up the win, pitching 2 1/3 innings of scoreless relief.

The Tigers don’t play any midweek games this week and then get back into the thick of it next weekend against the rival South Carolina Gamecocks. Clemson hosts South Carolina at 4 p.m. next Friday, the teams play next Saturday at 4 p.m. at Greenville’s Fluor Field, and the series finale will be at Founders Park in Columbia Sunday at 1:30 p.m.

Dabo Swinney on his philosophy with the transfer portal
Post your comments!