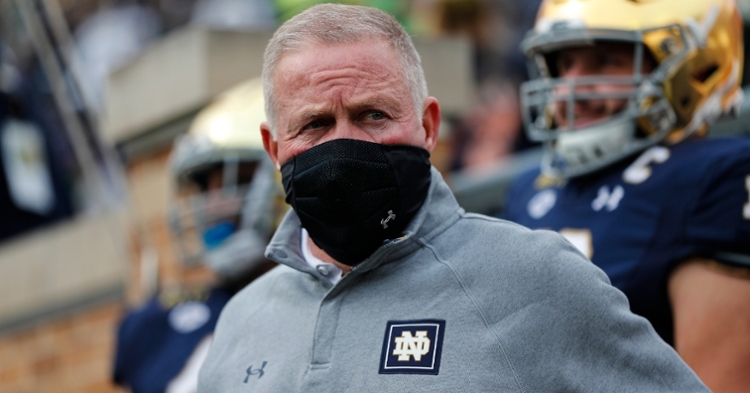 Notre Dame head coach Brian Kelly says it doesn’t matter that injuries have affected top-ranked Clemson, or that the Tigers will be starting a true freshman at quarterback. He says his fourth-ranked Irish are still facing the best team in the country, depleted roster or not.

Clemson and Notre Dame face off Saturday at 7:30 pm (NBC) in a matchup that might be a preview of this year’s ACC Championship Game.

Kelly, speaking to the media Monday, said the Tigers are deserving of the No. 1 ranking.

"I'll begin with the opponent, Clemson, the No. 1 team in the country and deservingly so. Everything they do, they do well, all phases of the game, offense, defense, special teams,” Kelly said. “Consistent in everything. Their record since 2018 is 36-1, so I'd be repeating if I didn't say that coach has done an incredible job. Again, just in all phases, they're well-coached, prepared for everything, and we're excited about the opportunity to play the No. 1 team in the country. I know our guys are excited about the opportunity."

Clemson started true freshman quarterback DJ Uiagalelei last Saturday after starting quarterback Trevor Lawrence tested positive for COVID-19. Uiagalelei will get the nod again this week and Kelly said the Irish have to make him uncomfortable.

"Well, we played Trevor Lawrence when he was a freshman and there are some that you'd think would have a difficulty in certain situations relative to third down and different coverages, but they're well-coached,” Kelly said. “These kids see a lot now and are well prepared. DJ will be well prepared for a number of things that we'll show him. The most important thing is to make sure that he's not comfortable back there. You got to get a great pass rush, you got to get him to move his feet, you got to make sure that they don't get in a rhythm, which is really the case for a lot of quarterbacks.

“I just think that whether you're a freshman or whether you're a senior, I think a lot of the axioms are still the same, that you don't want a quarterback to feel comfortable. For us defensively, get him out of a comfort zone, don't let him in rhythm, don't give him the easy throws that are comfortable for him and make him do some things that he doesn't want to do."

Kelly then went on to say that he won’t allow his team to make this game into a bigger event than it already is, saying the team that loses still has a chance to achieve all of its goals.

“No. Look. This game, it's not the end-all for us. For us, we could win this game but if you lose to BC, this game doesn't mean anything. We're still in pursuit of a conference championship,” Kelly said. “It's about steady play. It's about raising your level of competing on Saturdays, which we're in the process of doing. It's about consistency in performance. Which, we're certainly well on our way to checking that box. We've shown an incredible consistency as a football team of winning week in and week out. Look, you're going to get opportunities like this and you want to win these games. There's no doubt.

“We can't be overly emotional about this football game and lose sight of the fact that we've got five more games to play as well. There's a lot of football still left out. We can't empty the tank and say, 'Hey, we beat Clemson, we've arrived.' No we haven't We've got to take this game as an important game. It's the No. 1 team in the country. You better play really well against a really good Clemson football team. And then get ready to move on and play a BC team on the road that's really good, too.

“I think what I'm saying is that this is a long haul. This isn't a destination point for us this weekend. We've got many more games. We're playing for a conference championship. It's not like when we were independent and you need to kind of get these games and validate your place in the college football playoffs. We're looking at winning the conference championship, and we have five conference games left and they all count as one. I know it's the No. 1 team in the country. Our guys know it's the No. 1 team in the country."

Kelly said his team can’t make the mistake of “emptying the tank” against Clemson this weekend.

“They're excited about that opportunity. But it counts as one and so you have to be able to balance that off because the next week gets at you immediately,” he said. “If you empty the tank this weekend and don't have anything left for BC, they're going to beat you. Flat out. There has to be a measure of emotional mastery here where you understand the opponent, you're excited about it. But you have to play your best. That's what we've been building up for, that competitive greatness on Saturday but still understanding that there's a lot of football still in front of us.”

Clemson will be without Lawrence and starting middle linebacker James Skalski, and several other players are questionable, but Kelly said the Tigers have the depth to overcome those losses.

Kelly ended his press conference by talking about running back Travis Etienne.

"I think he's the best running back in the country. I'll go on record on saying that. Elite speed. Tough inside-out runner and incredible out of the backfield,” he said. “He's the complete package. When you're looking up complete running back in the dictionary, his picture and name should be there. That's who he is. I don't know there's a back we've gone against and we've gone against some great backs that is complete of a player that he is."