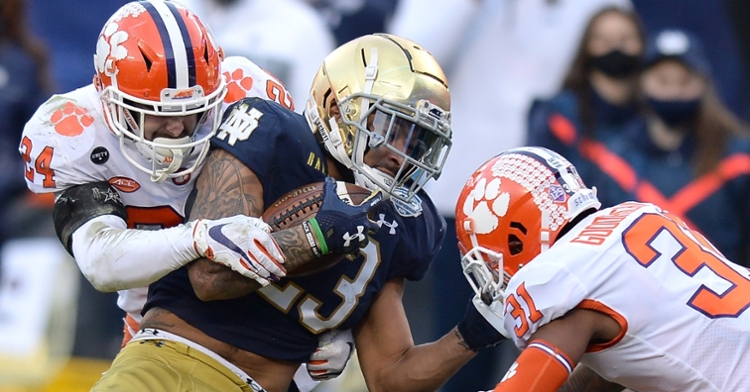 Clemson's defense made a statement in win over Notre Dame. (Photo courtesy ACC)

CHARLOTTE, NC – Billed as a rematch for the ages, Saturday’s ACC Championship Game turned into yet another blowout for Clemson in the title game.

No. 3 Clemson overcame a sluggish start and steamrolled No. 2 Notre Dame 34-10 in the ACC Championship Game at Bank of America Stadium in Charlotte, giving the Tigers a sixth consecutive ACC title and assuredly a sixth consecutive berth in the College Football Playoff.

Notre Dame ran out to a 3-0 lead on the game’s first drive, missed a short field goal on the second drive, and never threatened again until the game was out of reach in the fourth quarter.

Clemson improves to 10-1 overall while Notre Dame falls to 10-1. The College Football Playoff selection show will be Sunday at noon on ESPN.

Starting quarterback Trevor Lawrence, who missed the first game in South Bend, completed 25-of-36 passes for 322 yards and two touchdowns. He also added 90 yards on 14 carries on the ground. Travis Etienne, who had just 28 yards on 18 carries in their November game with Notre Dame, carried the ball 10 times for 124 yards and a score.

Clemson becomes only the third program in FBS history to produce a "double-double" — double-digit wins in a double-digit number of consecutive seasons. Clemson joins Florida State (14 from 1987-2000) and Alabama (13 from 2008-20) as the only programs ever to produce 10 straight 10-win seasons.

"It’s just, I mean, an amazing moment, to be able to share with our team in the locker room. That was fun," head coach Dabo Swinney said. "That was fun. You know championship football. You got to be at your best, and our guys were at your best, and or staff did an amazing job. You know, I don't know that most people really can understand how hard it is to do what this team has done, and just the leadership and focus and the guts, and the commitment. For me it's just special. And I just wanted to be a part of it, to watch it every day. To see them play was such unbelievable teamwork, to play smart, to play with such relentless passion to do everything we needed to do to win the game. Everything we didn't do in South Bend, we did tonight.

"We dominated the trenches on both sides of the ball. You know we needed to, as I said coming in, we need to be more efficient, and we did that. I mean, we did an unbelievable job, and just really proud of these guys man. I mean, to win 10 games anytime, and to do it 10 years in a row is an unbelievable

accomplishment … But to do it in this year is almost miraculous. And I’m just really proud of our guys offensively. We ran for 219 yards – 8.1 yards per carry – 322 yards passing. And on the flip side, they only rushed for 44 yards. They had more rushing yards on the first play in South Bend and they had

tonight. And that's a credit to our defense, and how they matched up. They ran from one and a half yards per carry 44 total (rushing) yards and three?of?12 on third down … We knew we do a much better job in the first time (versus Notre Dame this season) with a much better job tonight. The guys took great pride in that preparation and we responded."

Clemson won the toss and elected to defer, and the Irish moved right down the field. On 3rd-and-8, Ian Book was sacked by James Skalski for a five-yard loss, and the Irish kicked an ACC Championship Game-record 51-yard field for a 3-0 lead midway through the first quarter.

Clemson put together a seven-play drive that reached the Notre Dame 34, but the Irish dropped a linebacker in coverage that Lawrence didn’t see and the ball was intercepted by Kyle Hamilton and returned to the 38-yard line. The Irish once again put together a nice drive and, facing a 3rd-and-goal at the Clemson six, Book was hurried by Skalski and had to throw the ball out of bounds. The chip-shot field goal was missed, however, and the score remained 3-0.

Two runs gave the Tigers a quick first down. Lawrence then dropped back and hit a streaking Amari Rodgers in stride over the middle and Rodgers ran untouched for a 67-yard score. Late in the first quarter Clemson led 7-3.

Once again Notre Dame drove into Clemson territory and once again were turned away. Facing a 4th-and-3 at the Clemson 28, Book was flushed from the pocket and the ball bounced off the receivers’ hands for a turnover on downs.

The Tigers answered with a fairly methodical drive that covered 72 yards in just six plays. The drive began with a 21-yard pass to Cornell Powell, and four plays later Lawrence was flushed out the pocket and found EJ Williams on the right has. Williams weaved his way down the field and 33 yards later found the end zone for a 14-3 Clemson lead midway through the second quarter.

Clemson forced a Notre Dame punt and turned that into a 27-yard field goal from BT Potter for a 17-3 lead with 4:28 remaining in the half. On the ensuing possession, Notre Dame was once again forced to punt and Clemson took over at its own 12-yard line with 2:10 left to play in the first half.

Etienne converted a third-and-one at the 47-yard line, and following a spike, picked up nine more on a reception over the middle. Lawrence quickly brought the team to the line thinking it was first down and spiked the ball, but Etienne was ruled a yard short of the marker and the Tigers faced a fourth-and-short at the 44 with 29 seconds to play.

Swinney elected to go for it and Etienne burst through the middle and romped 44 yards for the touchdown, and Clemson led 24-3 with just 21 seconds remaining in the half.

The teams traded punts to start the second half, but Clemson managed to get the run game going late in the third quarter to extend the lead. Williams had an acrobatic catch on the sidelines (22 yards) to convert an early third down, and then Etienne ripped off runs of 17 and nine to the Notre Dame 34. Lawrence then pulled the ball on an RPO and sprinted 34 yards for the touchdown. Late in the third quarter Clemson led 31-3.

Clemson then added a 37-yard field goal from Potter with 10:30 remaining in the fourth quarter to go up 34-3. The drive covered 12 plays and 62 yards and took over six minutes off the clock.

Chris Tyree added a 21-yard scoring run for Notre Dame late in the fourth quarter to account for the final score.