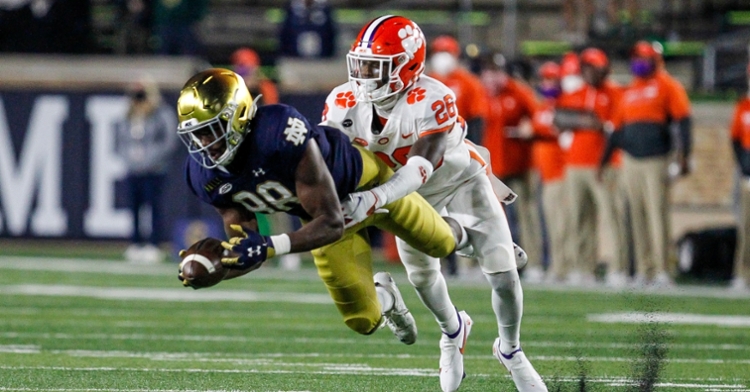 The rematch is this week, and Clemson players and assistant coaches met with the media Monday to discuss Saturday’s game against Notre Dame.

No. 3 Clemson will take on No. 2 Notre Dame at Bank of America Stadium at 4 p.m. Saturday in the ACC Championship. Clemson opened as a touchdown favorite but the line has ballooned to as much as 10.5 points in places. The Irish won the first meeting 47-40 in South Bend in double overtime in early November.

Here are the quick hitters from the interviews, with more to come:

*Feels like they did some good things at Notre Dame last time, but they also have a lot to improve on. A lot to learn from, especially the overtime periods.

*Says the Irish defensive line is solid, has both talent and technique. Calls the linebacker Jeremiah Owusu-Koramoah a “cement head” and if you don’t know where he is lining up that he will “lay a lick on you.”

*He says they are all looking forward to the rematch. Kind of odd to play a team a second time.

*He says that everyone feels fresh. He will have a better gauge of that once they get towards the middle of the week. This is the first time in college he has played this much, so the importance of the open date is huge. You have to recoup.

*This has been a hard season but they have fought through everything. He said Coach (Tony) Elliott tells them all the time they have to give up something in the moment to get what they want most.

*Says Trevor Lawrence is a great teammate and the way he has handled himself is a great example for a lot of elite level players.

*The players understand this is a play-in game for the CFP, but said they have been treating every game that way since the loss to Notre Dame. They know a two-loss Clemson team – no matter who the losses are to – will keep them out of the Playoff.

*The offense got together Sunday night and watched the first game and set the tone for this week. He said everyone has a good look in their eyes and they are prepared to play their best on Saturday. Everyone seems to be healthy and they want to understand the shortcomings from the previous game.

*On the health of the wide receivers, they are optimistic about Frank Ladson. He said that Cornell Powell and Amari Rodgers have to be leaders and they are going to lean on EJ Williams. Elliott was unsure of Joseph Ngata's status for Saturday.

*On how Lawrence performs in big games, Elliott says it’s just confirmation of who Lawrence is. “This young man stays true to the process and every word he says and he’s focused on his teammates and wants to go out each week and help his team win.”

*Elliott says it really isn’t about revenge or playing with a chip, it’s about winning the one-on-one battles on game day.

*Say Owusu-Koramoah is an older guy and runs like a heat-seeking missile. He studies film and looks for advantages. You can’t give him any kind of tip or trigger. He plays aggressive and physical and is a smart football player.

*Turner says Ian Book is comfortable and savvy. He looks like a mature, fifth-year quarterback back there and they will have to corral him this week.

*Super excited to play on Saturday and get a shot at beating Notre Dame again.

*He said it was emotional getting to run down the Hill on Senior Day. He has been here for five years and it’s always special to play in Death Valley. He said it was a cool moment he will never forget.

*Turner says Notre Dame is more athletic than when they faced the Irish in 2018. They get in more 12 and 13 personnel (two and three tight end sets). They do a lot of zone read and follow the big offensive line. They let Ian Book move around and create plays on his feet. Kyren Williams the running back is sneaky good.

*He said he hates it for his son and Clemson backup middle linebaker Jake Venables that he is out for the year. A lot of hard work is put in.

*The Irish use the tight ends to their advantage. They got them open on the benders and crossing routes in the first game, and when you are playing really good teams, the margin of error is smaller and you have to play more precise. There was a huge play late that was a 30-yard gain on a simple crossing route and Clemson has to do a better job this time around.

*On head coaching jobs becoming available this time of year, Venables says you can’t control what other people are saying, you can only control what is in front of you. He then quickly says his focus is on Notre Dame and the opportunity before them. That is where his focus is right now. He says he is well-compensated and happy where he is.

*Venables says he thinks linebacker James Skalski will play Saturday. He doesn’t know if Skalski is 100-percent – “I don’t ask questions that sometimes you don’t want to know the answer to” – but they feel like he will be close to or at 100-percent for the game Saturday. However, Kane Patterson has worked hard all year and is ready to go if needed.

*Venables said the week off was as good for the team mentally as anything, but he doesn’t know if the extra week is good or bad from a planning standpoint as Notre Dame has the same time. They treated it as a normal bye week for a practice schedule and time off. He says it’s been a challenging year. He said there should be a “little wind in our sail for all of us” coming off of it into a big game.

*He added that the earlier matchup is good for getting Notre Dame's "DNA" but that the game will come down to execution. They had a lot to teach from, from the game, but they have been employing that knowledge from after that game-on.

*He says this is a confident team.

*Good friends with cornerback Nick McCloud of Notre Dame. He talked to him on the field after the game in South Bend. The Notre Dame kicker Jonathan Doerer is also from Charlotte and he knows him.

*He says as a kicker he likes kicking in Bank of America Stadium. Says it is symmetrical. Also liked kicking at Virginia Tech because they have good grass.