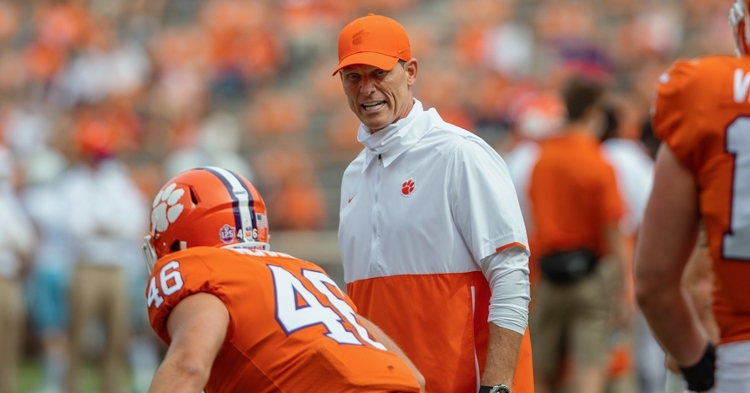 Clemson will have its weekly interviews with players and coaches today.

Here is the schedule:

Check back often for updates

DavidHood®
12:48 PM
We are done for today with interviews. Stories are on the way

Crump®
12:45 PM
That ends the interviews for today

DavidHood®
12:43 PM
Venables says Pitt is an excellent football team. Lost two 1-point games and the other two losses were when QB Kenny Pickett was out. He says Pickett is playing really well, super efficient, makes the right decisions, has poise, throws with accuracy.

DavidHood®
12:41 PM
Venables says Bryan Bresee has played more snaps than he normally would have because of injuries (in the company of a lot of guys who can say that). He says Bresee has a can do attitude but there is still a lot of growth that will and can take place.

DavidHood®
12:39 PM
Venables says Ruke Orhorhoro was the next tackle off the bench at Wake, and as soon as he gets the green light to play (sooner rather than later), Ruke will be a strong active body that can really help the rotation

DavidHood®
12:36 PM
He says to keep players sharp you have to stay on your strict regimen and preparation continues even on the bus to the stadium. He said they got better last week during the open date because of being able to work on scheme and players healing up.

CinTiger1
12:36 PM
I feel the team has moved on, they will be ready for Pitt and then if they have to play FSU again then it will be remembered!!!

DavidHood®
12:35 PM
As far as injuries, Venables says they will see when they get out there today. He doesn't know who will be allowed to play.

DavidHood®
12:34 PM
Venables says he felt it was important to have a windshield mentality and look forward. He could see that the players were taking the postponement hard, so he moved ahead to Pitt.

Clemgalalways
12:23 PM
So essentially we're going to sit here and sulk over something that's already happened, have zero control over, yet all anyone can do IS talk about it... And beyond that, keep interviewing players and staff and keep it on their mind too.

Whatever happened to windshield mentallity? I guess we're going to let sulking over fsu beat us in the Pitt game. A Pitt team I remind you that ppl were predicting would be top 10 this year.

DavidHood®
12:11 PM
We will wait now on defensive coordinator Brent Venables, who is on his own time. He could show up now. Or an hour from now. Or two hours from now. Or holler into the night at midnight tonight. Or not show up. He's the best in college football. He can do what he wants.

Crump®
12:09 PM
Nolan Turner said he hasn't made a decision yet on if he will be returning to Clemson next year.

DavidHood®
12:04 PM
Nolan Turner said he saw all of Coach Swinney's comments and appreciates them. Said the team followed all of the protocols. Said it was frustrating to not be allowed to play and he is behind Coach Swinney and how he reacted to it.

DavidHood®
12:03 PM
Nolan Turner said it's frustrating not being able to play after putting in all the work. For the players, you have to move on and realize you can't control everything.

DavidHood®
11:57 AM
Asked if it's a little strange to not turn on South Carolina film, Elliott said he hasn't really thought about it. Said they are used to the abnormal this year. Said he understands the circumstances. It was weird coming in on Sunday and not having a game to put to bed

DavidHood®
11:54 AM
Elliott says as a coach, he feels like he will be judged on more than play calls and wins and losses and be judged on the young men he helps produce. It encourages him as a coach and you don't see the fruits of your labor until years have passed, when you see them later and they introduce you to their wives and children.

DavidHood®
11:48 AM
Elliott said he appreciates Coach Swinney's comments and defending the program and his medical staff. It's tough when you do everything you can to follow the rules. It's frustrating when that is challenged.

DavidHood®
11:47 AM
Elliott said that when the players got on the bus you couldn't tell that they were that upset.

DavidHood®
11:46 AM
Tony Elliott said he was sitting at the pregame meal and when he heard the news his heart just dropped. He said he was hoping Swinney would say he was kidding, but he didn't. Said it was hard to see the players learn at 8:30 in the morning to learn they wouldn't be able to play.

Crump®
11:45 AM
Mike Jones interview is over. Coach Elliott will be next.

DavidHood®
11:44 AM
Mike Jones said he is looking forward to Pitt because he hasn't played football in a month.

DavidHood®
11:42 AM
Mike Jones said he feels like the FSU players wanted to play. It's hard to play college football and not love it. To practice all week and have it canceled is "low key heartbreaking. Everybody wanted to go out on that field and win."

DavidHood®
11:41 AM
Mike Jones said the reality is that COVID positives happen every single week, with each team, and that is just the reality right now. It is a challenge and it's a challenge for everyone. You have to push through it and make it work and you try to go in. You can't worry about the rest of the season, just take it week by week.

Crump®
11:38 AM
Mike Jones said nothing is guaranteed this year. Just taking it day by day.

DavidHood®
11:38 AM
Clemson’s game at Florida St. last Saturday was postponed after one of the Tigers’ backup offensive linemen tested positive for COVID Friday. The player made the trip to Tallahassee but was sent home. That didn’t stop Florida St. medical personnel from deciding it wasn’t safe to play and the game was postponed just three hours before kickoff.

Clemson head coach Dabo Swinney suggested that COVID wasn’t the reason for the postponement in an angry teleconference with the media Sunday.

Here is the recap of Bockhorst

Bockhorst said it didn’t take long to figure out that something was wrong.

“I was sitting in the tent with Blake Vinson getting ready to eat breakfast, and breakfast was late so that was my first inclination that something was wrong,” he said. “It was definitely a weird experience, but this year has had some extenuating circumstances for sure. It was weird.

"One thing is he'll always have his players' back. No. 2, I know how diligent we have been following protocol,” he said. “It was definitely disappointing not being able to play the game. We certainly appreciate coach Swinney stepping up and having our backs."

Bockhorst told me that he has healed after the injury at Notre Dame, would have played at Florida St., and is ready to take the field against Pitt next weekend.

Henry says that while they were waiting at the team hotel for the team to find pilots, defensive coordinator Brent Venables had the defensive players watching film of Pitt. He said they were watching TV with their breakfast.

“It was very weird to be on vacation in Florida and watching film of Pitt,” Henry said. “We were locked in where we were but I don’t know what the offense was doing. Coach V had us tangled up and we were locked in for the next one.”

Henry said he knew something was up when Swinney was late to the tent for the team breakfast.

“I was waiting on something like that to happen,” Henry said. “Coach Swinney was late to breakfast and that never happens. That was the first time that had happened in the three years I’ve been here, so I knew something bad was going on. And sadly I was right. I ate a little more breakfast than I would on a game day.

Crump®
11:35 AM
Mike Jones said he is back to 100%. Said the last 2 games are the first two he missed in his entire career to this point.

TonyCrumpton®
11:25 AM
Bockhorst was asked by ESPN if playing this season with all the challenges of COVID-19 has been worth it.

"Without question, it's been worth it," he said. "There's been things that have been challenging, things we're experiencing this year we never have in the past, but at the end of the day, we get to show up to team meetings and be around the guys we love and go to practice and play the game we love. You're around people who care about you, and this is your family."

Crump®
11:24 AM
KJ Henry said he knew something was wrong when Dabo Swinney was late for breakfast. He said that has never happened before.

Crump®
11:21 AM
Matt Bockhorst interview is over. KJ Henry will be next.

DavidHood®
11:15 AM
Bockhorst says that he hates that people are questioning the credibility of Danny Poole and the Clemson medical staff. "It's baseless and you can't let people affect how you feel."

TonyCrumpton®
11:15 AM
Bockhorst -- "I would be shocked if there's a better system in the country. We're lifting with masks and gloves on."

DavidHood®
11:14 AM
He says that the reality is people are going to test positive, you can get it anywhere, but says he feels like the facility at Clemson is clean.

Crump®
11:12 AM
Bockhorst said a decision to play FSU at a later date is above his pay grade.

Crump®
11:08 AM
Bockhorst said he would have played against FSU after suffering an injury against Notre Dame.

Crump®
11:07 AM
Matt Bockhorst said he found out the game was canceled at breakfast. Breakfast was late getting started and that was his first clue something was up.

Crump®
11:05 AM
Interviews will start with OL Matt Bockhorst
Comment on this story